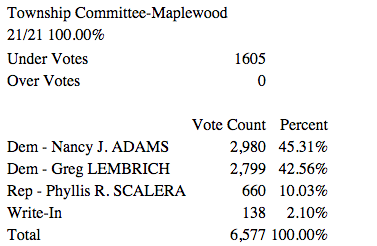 Lembrich ran without the endorsement of the Maplewood Democratic Committee in the spring primary, defeating incumbent Township Committeeman and former Mayor Jerry Ryan by a sizable margin. (Ryan’s supporters gave Ryan a parting salute on November 3 by posting more than 100 write-in votes.) However, Lembrich received the Democratic Committee’s full support for the general election, along with Adams.

Republicans failed to field two candidates for the election, and Scalera was unable to participate in candidates forums this fall due to health issues.

“I’m humbled and honored to have been given the support of Maplewood voters today and winning a seat on the governing body,” wrote Adams in an email to Village Green. Thanks to my running mate Greg Lembrich and our campaign committee for their dedicated work to get out the vote and helping coordinate our campaign events and campaigning door to door. Thanks to: Erin Russ Scherzer, Jaina Flynn Lally, Barbara Heisler, Tom Carlson, Robin Moree, Victor De Luca, Amy Simon, Ian Grodman, Garnet Hall, Kathleen Ses Spinelli, Fred Profeta, David Huemer, Stephen Sigmund, and many more volunteers for your help and guidance!! A special thanks to my husband Sal Renda for supporting me in this new endeavor and being willing to endure me being at countless meetings and events for the next three years! I look forward to this new experience and hope to be an asset to this town I adore. Thank you to Mila Jasey, Mary Theroux, John F. McKeon for the awesome teamwork and support! Thanks all!”

Lembrich released this statement via his Facebook page: “Thank you to the voters of Maplewood for trusting me to help govern the town. I look forward to working my tail off to make the best community in the USA even better! Thanks to all the volunteers who helped the campaign, to my running mate Nancy Adams, our campaign manager Erin Russ Scherzer, and also to Jerry Ryan and Kathy Leventhal for their decades of wonderful service to our town.”

Bill Gifford: Candidate for South Orange-Maplewood Board of...