Incumbent Nancy Adams and first-time candidate Jamaine Cripe have been endorsed by the Maplewood Democratic Committee as its 2021 candidates for the five-member Maplewood Township Committee.

The primary is on June 8, 2021. The general election is November 2, 2021. According the New Jersey State Division of Elections, the candidate filing deadline for the June primaries is April 5. Candidates selected by the MDC often run unopposed in the Democratic primary — with notable recent exceptions such when Greg Lembrich ran and won as an un-endorsed candidate in 2015 (Lembrich has announced he is not seeking a third term). There have been few Republican candidates for TC in recent years. No Republican ran for TC last year against Democratic incumbents Dean Dafis and Vic DeLuca. 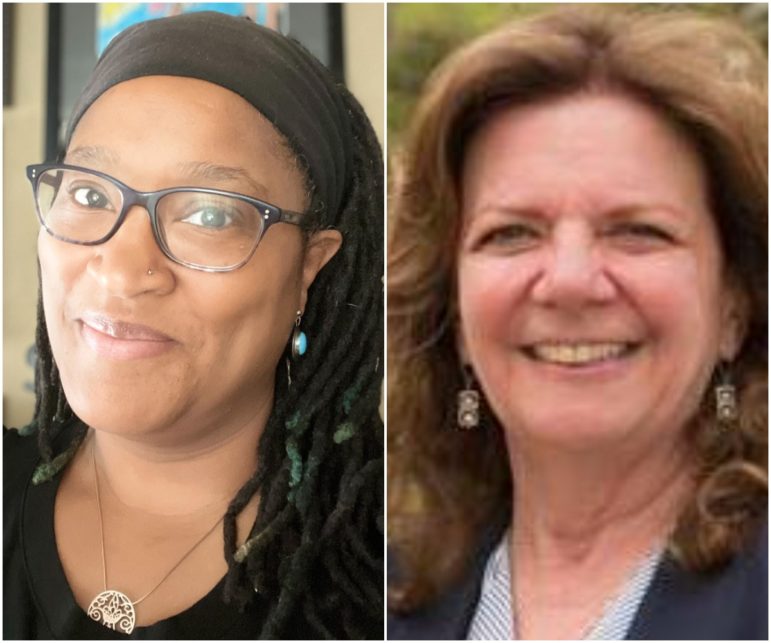 Adams is vying for her third three-year term on the township’s governing body. She is a longtime resident and works as a downtown revitalization executive as head of Summit Downtown Inc. On the TC, Adams has served as the Chair of the Engineering, Public Works and Planning; has been a member of the Economic Development Committee, Code Enforcement Committee, Environmental Advisory Committee, Open Space Trust Fund, the Maplewood Village Alliance Board, Memorial Park Conservancy; and has served on the Maplewood Planning Board for 14 years and previously sat on the Economic Development Commission. As a community activist, Adams co-founded College Hill Neighborhood Association and the Springfield Avenue Partnership. She has also served as class parent and worked on theater at Tuscan School and on PTAs throughout while raising her children in Maplewood.

Adams has been notable for her work on environmental issues, including a limited gas-powered leaf blower ban, as well as for her support of women’s issues through SOMA Celebrates Women.

In her letter to the MDC, Cripe wrote, “I’m running for Township Committee because I want to help improve our town and make our community stronger, safer, and more equitable for all who live here or pass through.”

Cripe continued, “I am a 17-year resident of Maplewood having moved here with my husband to start a family. We found and fell in love with our house [in the Lightning Brook neighborhood] and we are still here today, making improvements and connecting with our neighbors in ways that bring us joy. My commitment to community has been a constant throughout my life. It was the way I was raised, growing up with a career military police officer father and a registered nurse mother. They raised all seven of their kids to ‘give back to [your] community, wherever you happen to be,’ and my parents modeled that principle in their own extensive community work. That lesson has stuck with me as I’ve been a volunteer in some capacity since I was a teenager. I am raising my daughter in the same tradition.”

Cripe outlines her three major focuses as: strengthening the relationship between law enforcement and the community by implementing comprehensive police reform; creating more community-supported youth recreation programs for children regardless of their family’s ability to pay; and helping local businesses prosper.

MDC Chair Ian Grodman explained the selection process: “The Maplewood Democratic Committee met on Monday night, March 1, via Zoom to interview and select our candidates for endorsement. There was quite a bit of interest this year with eight people responding to our notices in the local media and on social media about running, although in the end, only five sought the endorsement.”

“All five were truly excellent potential candidates,” said Grodman, “and the meeting went four hours long while the candidates were interviewed, reviewed and the committee deliberated.”

“It was a difficult decision, but in the end, we chose Nancy and Jamaine. Nancy’s accomplished track record as a community volunteer includes being a founding member of the Springfield Avenue Partnership and the College Hill Neighborhood Association. That work led to a career in downtown economic development in numerous towns throughout New Jersey. Nancy has served on the planning board and on numerous school parent organizations, and is regularly contacted by other towns for assistance with the development of environmental ordinances as a result of her work on environmental initiatives right here in Maplewood.”

Regarding Cripe, Grodman said, “While new to Maplewood politics, Jamaine demonstrated a long commitment to community in her 17 years as a Maplewood resident as well as throughout her life. Jamaine has demonstrated commitment to all the schools her daughter has attended since her family moved here, and is active in her neighborhood. Her commitment to the youth of Beacon Unitarian Church and the social justice issues that community has always been a leader on were also appealing to the MDC. But it was Jamaine’s commitment to connecting people throughout the community and her focus on the individuals who make this a great community that gave her the final edge in our selection process.”

Adams and Cripe will be meeting this week to discuss their platform and will be updating the community shortly.