From the Seton Village Committee: 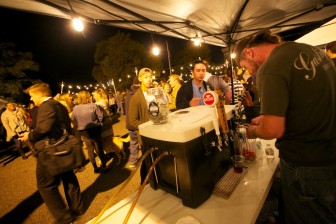 The annual Seton Village Food Truck and Craft Beer Festival, to be held on Friday, September 23 on Irvington Avenue in South Orange, will feature sixteen trucks—the most ever in the festival’s three-year history.

The trucks will line Irvington Avenue from Ward Place to Tichenor Avenue/Riggs Place, while a plethora of local New Jersey craft brews will be poured at the beer garden set up within the parking lot on Irvington and West Fairview Avenues.

Doug Zacker, chairman of the Seton Village Committee, explained that the increased number of food trucks was necessary to accommodate the crowd of several thousand that’s expected to descend on Seton Village during the evening. “We’ve signed on a number of first-time festival participants,” he said, “and that will allow us to provide our patrons with a wider variety of food than ever before.”

Not to be outdone, the craft beer garden, hosted by South Orange’s Gaslight Restaurant and Brewery, will feature a larger menu than ever before, including the addition of local wines and cider. “Our festival boasts one of the most extensive selections of NJ craft beers available anywhere, so it’s a must for connoisseurs of the state’s local brews,” said Zacker. Selections to be featured at the beer garden, which will be open to adults 21 and over, include the following:

The Seton Village Food Truck and Craft Beer Festival will take place between 5:00 p.m. and 10:00 p.m. on Irvington Avenue between Ward Place and Tichenor Avenue/Riggs Place. The event will feature 16 food trucks, a craft beer garden (hosted by Gaslight Restaurant and Brewery), and two musical stages featuring four local bands. Residents are reminded that Irvington Avenue will be shut down between Ward Place and Tichenor Avenue on Friday, September 23 between 3 p.m. and 11 p.m., and detours will be set up to redirect traffic. All attendees are encouraged to walk to the event if possible as parking will be limited. Patrons of the craft beer garden should note that as per NJ state law, no one under the age of 21 will be permitted to enter the area; this includes children and babies of all ages.

The Seton Village Food Truck and Craft Beer Festival is produced by the Seton Village Committee in conjunction with the Village of South Orange, the South Orange Department of Recreation and Cultural Affairs, and the South Orange Department of Public Works. Generous support has been provided by Gaslight Restaurant and Brewery; Premiere sponsor Seton Hall University; Supporting sponsors Natalie Farrell of Weichert Realtors and Blink Fitness; and Community sponsor interACT Theater Productions.

The mission of the Seton Village Committee is “To create a thriving Irvington Avenue which attracts patrons, residents and the Seton Hall University community with diverse shops and restaurants, and a safe, attractive and vibrant neighborhood.” To learn more and get involved, please visit us on Facebook at https://www.facebook.com/SetonVillageSO