Update, October 14: South Orange announced there had been another positive Covid case; a 17-year-old female.

Citing “large house parties” and parents “condoning and permitting large gatherings in their homes,” South Orange Village President Sheena Collum forcefully reminded residents to abide by state guidelines limiting gatherings and mandating face coverings and social distancing as the township reported its “worst day” with regard to new COVID-19 cases since April. She noted that one of the new cases is a 17-year-old female high school student.

“It is with very sad and very disappointing news that I report to the public that today was our worst day probably since last April of this year,” said Collum as she opened the October 12 South Orange Board of Trustees meeting.

“We’ve had five positive test cases. The five individuals are unrelated. They are not all in the same home. One includes a 17-year-old teenager. For those of you who spend a great amount of time on social media, you have heard some rumblings about large house parties taking place within the Columbia High School [community]. One of the people identified in today’s listing was a 17-year-old female. We have received emails from parents who are raising these concerns that other parents are condoning and permitting large gatherings in their homes. We have received these emails both ourselves, the Board of Trustees, the Superintendent of Schools [Dr. Ronald Taylor]. They have been shared with our health officer,” said Collum. 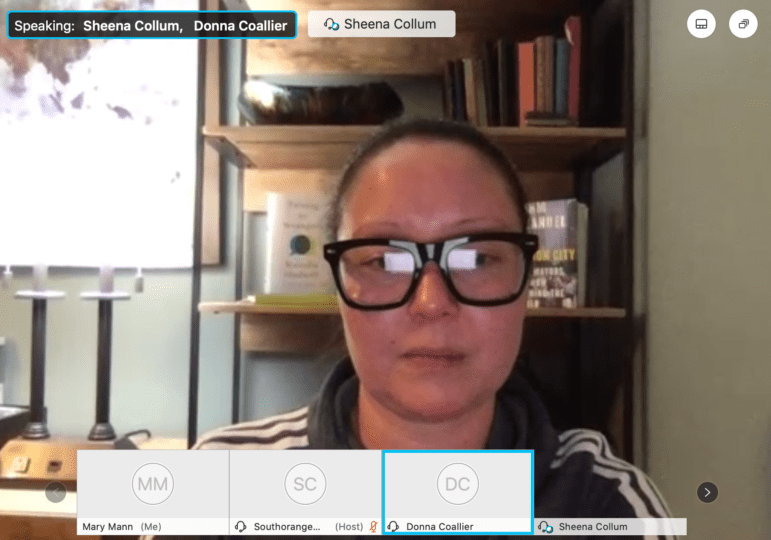 Sheena Collum at the October 12, 2020 South Orange Board of Trustees meeting

“Know that we are collaborating with our local police department, with the school district,” added Collum, who stressed:

“We cannot, we cannot allow this to happen. Having five positive test cases in one day after we had close to five weeks of zero, showing a spike in cases.”

In addition, Maplewood Mayor Frank McGehee confirmed that Maplewood Township has confirmed one 18-year-old who tested positive this month. “All other cases have not been teenagers this month,” said McGehee who noted, “We are still conducting an active investigation of cases and gathering information so we cannot confirm additional cases of teenagers at this time. We do ask that if and when people are contacted by the Health Division that they answer our call. For those who might have been exposed to a positive or suspected case, they should get tested especially if they have symptoms and quarantine until they get test results. Please remember the township is offering free testing at the Maplewood community pool through the end of the month. We advise that people take advantage of this opportunity.”

Collum noted that last Thursday, the state of New Jersey reported 1,301 new positive test cases — “that was the single largest spike in New Jersey since May 10, I believe.”

“For those feeling a little more comfortable in the fall: Don’t.”

“Unnecessary gatherings are discouraged and all gatherings in general should follow all state and CDC guidelines,” said South Orange Office of Emergency Management coordinator Scott Egelberg. “We encourage all families to continually discuss and remind each other to stay safe and not to grow complacent.” Egelberg urged residents who see anything they believe to be a violation of Covid restrictions to report it to the police.

As for how the town conducts contact tracing from parties and gatherings, Egelberg said labs report positive results to a state database which is then reported to town health officers, typically with little lag time.

“All positive cases will typically be getting a call shortly after the alert is received so that contact tracing can begin,” Egelberg said.  “As long as the infected individual is able to identify their contacts, then we are able to notify them in a timely manner.  Sometimes we are also able to gather additional contacts from others who have been exposed.”

However, if an individual isn’t able to or doesn’t name all the people s/he has been in contact with, public health officials will question each contact to find out any additional names to ensure all who were exposed are notified.

“This is sometimes not easy as we don’t identify who the positive case is, but our contact tracers are extremely thorough to make sure we notify anyone who may be at risk. And if there is a ‘superspreader’ event where there are hundreds of people who may have been exposed, those events will typically be released publicly so that anyone who attended knows that they should take the necessary actions, whether it be testing or quarantine.”

Village Green has reached out to the South Orange-Maplewood School District for more information. District spokeswoman Anide Eustache said that district is discussing positivity rates “with the town health departments and will work together to communicate this information to our student and family school district community.” She noted that any cases are investigated by town officials. “When we have more details/information we will share with the community ASAP,” said Eustache.

Collum noted that the Township of South Orange would be putting out an emergency alert with updates on Tuesday, October 13. She also directed residents to follow cases at Seton Hall University through a portal on the university website.

“I say this with the utmost urgency,” said Collum. “We are seeing the highest spike, five including one teenager. We just want everyone to be as safe as possible.”

This story has been updated with information from Maplewood Mayor Frank McGehee.