UPDATE: As of Monday morning, June 20, the SOMSD COVID Dashboard reflects that Maplewood Middle School has returned to universal indoor masking as the result of an outbreak. More information here.

Although the COVID-19 infection rate remained high throughout Maplewood and in the state of New Jersey, Maplewood’s health officer told elected officials at the Board of Health meeting on June 8 that the township’s numbers would soon lessen.

Health Officer Candice Davenport also gave updates on influenza, monkeypox, vaccination locations, baby formula resources, free summer meals for children — and a plan to provide health department services to South Orange — during an update to the Board of Health embedded within the Maplewood Township Committee meeting on June 8.

Two types of the Omicron variant of COVID-19 have spread through Maplewood “fast and furious over the last few weeks,” Davenport said at the June 8 meeting. She said that the Board of Health had been “overseeing outbreaks” in the South Orange-Maplewood School district but would be closing out the monitoring “within the week.” Most cases in those outbreaks, Davenport said, resulted from students traveling or participating in shows or other large events. “The school district has taken precautions and we are moving forward to hopefully a nice break” when school ends later this month, Davenport said.

According to the data shown during Davenport’s presentation to the Board of Health, in May, there were 577 COVID cases in the township but the numbers are “slowly evening out,” she said. “Hopefully COVID has gone through our community and will dissipate shortly.” 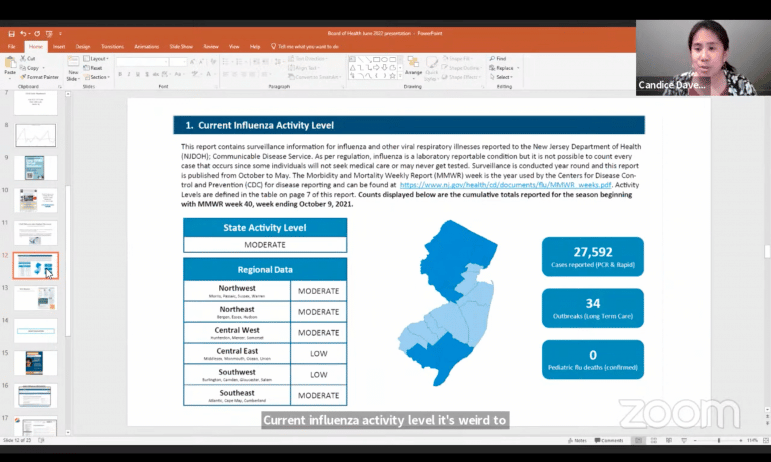 If people need COVID vaccines or tests, Davenport said, Essex County’s site at the former Sears in the Livingston Mall has more limited hours now than it did earlier this year but offers both services three days a week. Mobile sites are offering additional times. All county sites are also offering pediatric COVID boosters now to children aged 5-11. If the pediatric dose of the COVID-19 vaccine for children ages six months to four years is approved by the FDA, Davenport said, the county will also begin offering those vaccines as soon as they are available. “We are eagerly awaiting that,” Davenport said.

Davenport warned those at high risk of developing severe COVID-19 that taking Paxlovid, an antiviral, to reduce symptoms, comes with the risk of developing a “rebound” illness two to eight days after testing negative. If that happens, Davenport said, people should isolate for five days, re-test, and then wear a mask for another five days, just as they would have done during their initial infection.

Davenport offered updates on two other illnesses that have been in the news recently. Influenza cases, she said, had been high in Maplewood and in New Jersey for several weeks. “It’s weird to be talking about influenza in June,” she said, but because mask mandates were lifted in the last few months and people resumed normal activity levels, “influenza has kind of a lag time.” Influenza cases, Davenport said, were now trending towards “moderate to low” in the area.

Monkeypox, which has made headlines of late, is rare and comes with little risk to most people in the area, Davenport said. But because there have been eight reported cases in New York City, most linked to travel, she cautioned Maplewood residents to take precautions if using area airports, including Newark Liberty Airport. Monkeypox is transmitted more by close proximity to an infected person or animals and less through the air, Davenport said, but she said that wearing a mask, as recommended by the Centers for Disease Control, can help mitigate the risk of infection.

Davenport hailed the installation of a new suicide prevention lifeline in New Jersey. Residents who feel that they or someone they know are at risk of harming themselves can call 988 and receive counseling and assistance.

A website to help Maplewood residents locate or import baby formula during the current shortage, established by the federal Department of Health and Human Services, is now available. Click here for those resources.

She urged residents to complete a New Jersey state behavioral health survey over the phone in the next few weeks, saying that results drove funding and grant funding for municipalities.

And she said that the Maplewood township website now featured resources for both people with disabilities to access services, and for LGBTQ+ healthcare assistance.

Davenport also announced that free breakfast and lunch would be provided to Maplewood children under 18 and to local adults over 18 with special needs from July 11 to August 19 in Maplecrest Park. Township committee member Jamaine Cripe asked Davenport to look into services for food-insecure adults, noting that two recent food drives in which Cripe took part had far more demand than supply. Davenport said she could provide social support to local seniors to help with food insecurity and would discuss further the issue with Cripe to make sure other adults’ needs were met.