WSOU’s complete line-up of holiday programming is as follows (this schedule is available online at https://tinyurl.com/y7v5b2ma): 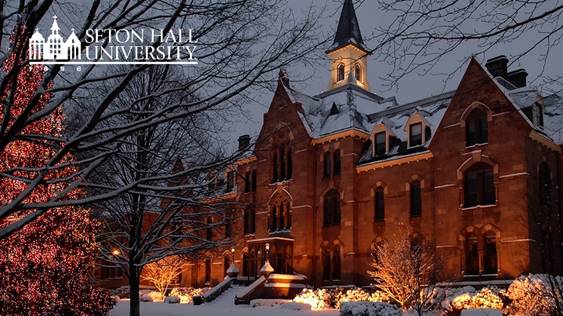 For the holiday season WSOU is playing in regular rotation loud rock covers of Christmas classics. Selections include holidays songs performed by A Day To Remember, Dropkick Murphys, GFM, He Is Legend, Ice Nine Kills, Ill Nino, Pennywise, My Chemical Romance, Trans-Siberian Orchestra and others.

The Christophers (6:30 a.m.) – Music legend Dolly Parton discusses her Christmas memories growing up in the south and her latest Christmas album.

The Christophers (8:30am) – “The Best of Christmas.” Highlights from past Christmas programs.

For Unto Us: The Messiah Story (10:30 a.m.) – Martin Jarvis narrates the story of how George Frideric Handel’s “The Messiah” came to be. Featuring performances by Metropolitan Opera soloists Erin Morley, Tamara Mumford, Ben Bills and Tyler Simpson, and a rousing version of the “Hallelujah Chorus.”

The Kindship of Catholics and Jews (11 a.m.) – Reflections on the season of Advent by Father Lawrence Frizzell, director of Seton Hall University’s Center for Jewish-Christian Studies.

A Polka Party Christmas (Noon – 2 p.m.) – WSOU’s weekly Polka Party show offers up a delightful and joyous mix of music for the Christmas season. The Polka Party has been airing on WSOU since 1949 and is the station’s longest-running program.

The WSOU Christmas Special (10 p.m. to midnight) – This annual WSOU holiday special features two hours of Christmas carols and songs by a variety of artists from the 1940s to the present. Listeners will be treated to both holiday classics and lesser known but equally wonderful Christmas music. Hosted by Seton Hall/WSOU alumnus Frank Scafidi.

A Metal Christmas Eve (6 a.m. – 8 p.m.) – As the home of The Loudest Rock, WSOU presents metal, punk, and hardcore covers of Christmas classics throughout the day.

A Franciscan Christmas (8 – 10 p.m.) – Brother Greg Cellini of the Franciscan Brothers of Brooklyn and alumna Molly Meller host this annual Christmas Eve program, which has become a Seton Hall community favorite. This year’s theme is “Inclusivity” with a look at how we can all embrace one another through love and hope despite humanity’s current divisions. In addition, the program will also feature Franciscan reflections, religious and secular Christmas music, and a poetry reading.

Mass (10 p.m. – midnight) – A live broadcast of the Christmas Eve Mass from Our Lady of Sorrows Church in South Orange, N.J.

Christmas Oratorio (6 – 8:30 a.m.) – WSOU’s annual presentation of Johann Sebastian Bach’s Christmas Oratorio. This Christmas morning airing of Bach’s choral masterwork is a Seton Hall tradition, with the station offering a different performance each year. For 2020, WSOU will air a recording of the Christmas Oratorio by the Academy for Ancient Music Berlin and the Berlin RIAS Chamber Chorus, with soloists Dorothea Röschmann, Andreas Scholl, Werner Güra, and Klaus Häger. The conductor is René Jacobs.

A Merry Little Christmas (8:30 a.m.) – Tony-winning actress, dancer, and singer Sutton Foster treats listeners to songs for the season, including “Angels from the Realms of Glory,” “Christmas Time is Here,” and “Silent Night.” Plus, actor Hugh Bonneville reads the Christmas Story from the Gospel of Luke.

A Festival of Nine Lessons and Carols (9 a.m.) – Biblical readings and carols in celebration of the season performed by the Seton Hall University Choir and Orchestra and recorded live in 2019 inside the campus’ Chapel of the Immaculate Conception.

Angels Among Us (10:30 a.m.) – Tony Award-winning singer and actress Kristin Chenoweth joins with a full choir and orchestra to perform “O Holy Night,” “Hark! The Herald Angels Sing,” “Somewhere in My Memory,” and more.

A Christmas Carol (11:45 a.m.) – After a traditional telling of “A Christmas Carol,” WSOU offers a contemporary twist on the seasonal classic. Swedish symphonic power metal band Majestica provides a musical interpretation of Charles Dickens’ holiday tale through their just released album “A Christmas Carol.” In nine tracks, the band tells the story of Ebenezer Scrooge through a unique sonic experience.

The Top 89 Countdown (1 p.m. – 8 p.m.) – WSOU counts down the Top 89 metal, punk, hardcore, post-hardcore, and loud rock songs of 2020. Listeners will have the chance to win WSOU prize packs during the countdown. The Top 89 will be repeated on Monday, Jan. 4, 2021 beginning at 1 p.m. as a special treat for those returning to work after the holidays.

The Loudest New Year! (8 p.m. – Midnight) – To ring in the New Year, WSOU’s DJs spin the very loudest rock to entertain head-banging revelers as the station countdowns to midnight. The WSOU news department will provide live updates about the festivities in New York City’s Times Square.

WSOU 89.5 FM, which began broadcasting in 1948, is the student-run radio station of Seton Hall University. Celebrated for its loud rock format and coverage of Seton Hall athletics, WSOU’s signal reaches all five boroughs of New York City and much of northern and central New Jersey and is available on iHeartRadio. WSOU was the 2016 winner of the National Broadcasters Association’s Marconi Award for Noncommercial Station of the Year and a 2019 nominee for the Marconi Award for Best College Radio Station. More information about the station can be found online at www.wsou.net and www.facebook.com/WSOUFM.

Applications to be a Vendor at the South...