OPINION: Why I Got Arrested for Climate Action. Will It Make a Difference?

Scientists are screaming, and so are the headlines. Current global commitments are not enough to slow our march towards the catastrophic destruction of nature, habitat, our food supply and an earth we would like to inhabit. Yet no one seems to be listening – not enough of my fellow citizens, certainly not our national representatives, and of course not capitalist kingpins.

I myself didn’t mobilize as early as I could have. It took the 2016 election, and the shocking realization that terrible things happen when we don’t stay engaged, to get me out of my armchair. I joined SOMA Action. I volunteered to be the Climate Committee Chair. We worked with town allies to get local ordinances banning single use plastic bags, worked with the statewide coalition Empower NJ to fight new fossil fuel projects and get a few big ones defeated, worked to make sure we 2020 would not be a repeat of 2017. But the climate emergency is so vast, it didn’t feel like enough.

Leading scientific journals have been sounding the alarm for decades, two concluding last year that at our current patterns of consuming the earth, we have less than a 10 percent chance of avoiding an irreversible collapse of the foundations for survival. As if to illustrate the point, this summer wildfire smoke traveled from the other side of the country to cloud our own skies. A friend had to climb out of her car window to escape the flooding of Hurricane Ida. Yet still we fail to act, even as other scientists point out we have all the tools we need to decarbonize and, by the way, create a healthier, sustainable way of living on earth. President Biden claims to recognize the “existential threat,” but for every step forward, like denying a permit for the XL pipeline, he takes a step back, like defending a huge oil drilling project in Alaska and the Dakota Access pipeline. Two Democratic Senators appear ready to sink the funding for climate protection included in the draft Reconciliation package claiming, speciously, that we cannot afford it. It is the alternative that we cannot afford.

It’s difficult to sleep at night. We are not doing enough to change our trajectory. But I’m not Greta Thunberg, I’m not Bob Bland. 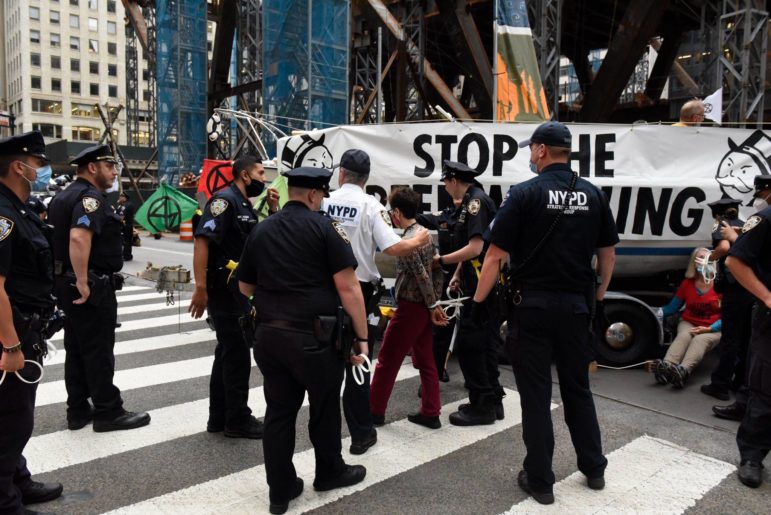 So when I learned that Extinction Rebellion was planning a major civil disobedience event in New York City to call out the unfathomable fossil fuel and deforestation profits of J.P. Morgan Chase, Bank of America, and Citibank, I decided to join. I met a group in the early morning hours and was given a black banner to block the road that read, “Stop Bankrolling Fossil Fuels”. The organizers moved a boat to the front of the main entrance of the 52-story Morgan-Chase office and next to the construction of the 70-story skyscraper they are building to replace it (another climate crime) with a banner shouting “Stop Funding Climate Death!” Activists locked themselves onto the boat and inside the building lobby. A woman was swinging on the top of a wooden tee-pee erected next to the boat. As a chill wind gusted and drizzles past over, an impressive number of police officers assembled and equipped themselves. When they ordered everyone to evacuate, I sat down next to the boat.

Two officers told me to stand up, zip-tied my hands behind me, walked me to the NYPD van, searched me thoroughly, removing even the nuts someone had told me to stash in my pocket, belted me into the first seat in the van, and closed the door. I spent an eternal 10 minutes in solitude, then the tee-pee protester was loaded in. It took about an hour to unlock eight more, search them, and load them in the wagon. The officers were definitely bothered by the effort it took to extricate activists safely from their bindings.

We were driven all the way downtown, to a facility near Chinatown. We lined up to be booked, and they actually took my photo with the rookie officer in charge of my paperwork. A few of us asked to use a bathroom, and we were taken into cells where there was a cot, a seatless toilet, some loose toilet paper, and bars. The female officer courteously stepped away to give us a little privacy. It was about 11:30 a.m.

The women were locked in small, individual cells, while the men were detained together in one large room. While we waited, more protesters were booked and brought in, doubling up the women’s cells. Eventually there were about 30 of us. I got a roommate and we bonded while we shared the cell, but then her officer came to inform her she was being released. I felt sorry for myself. 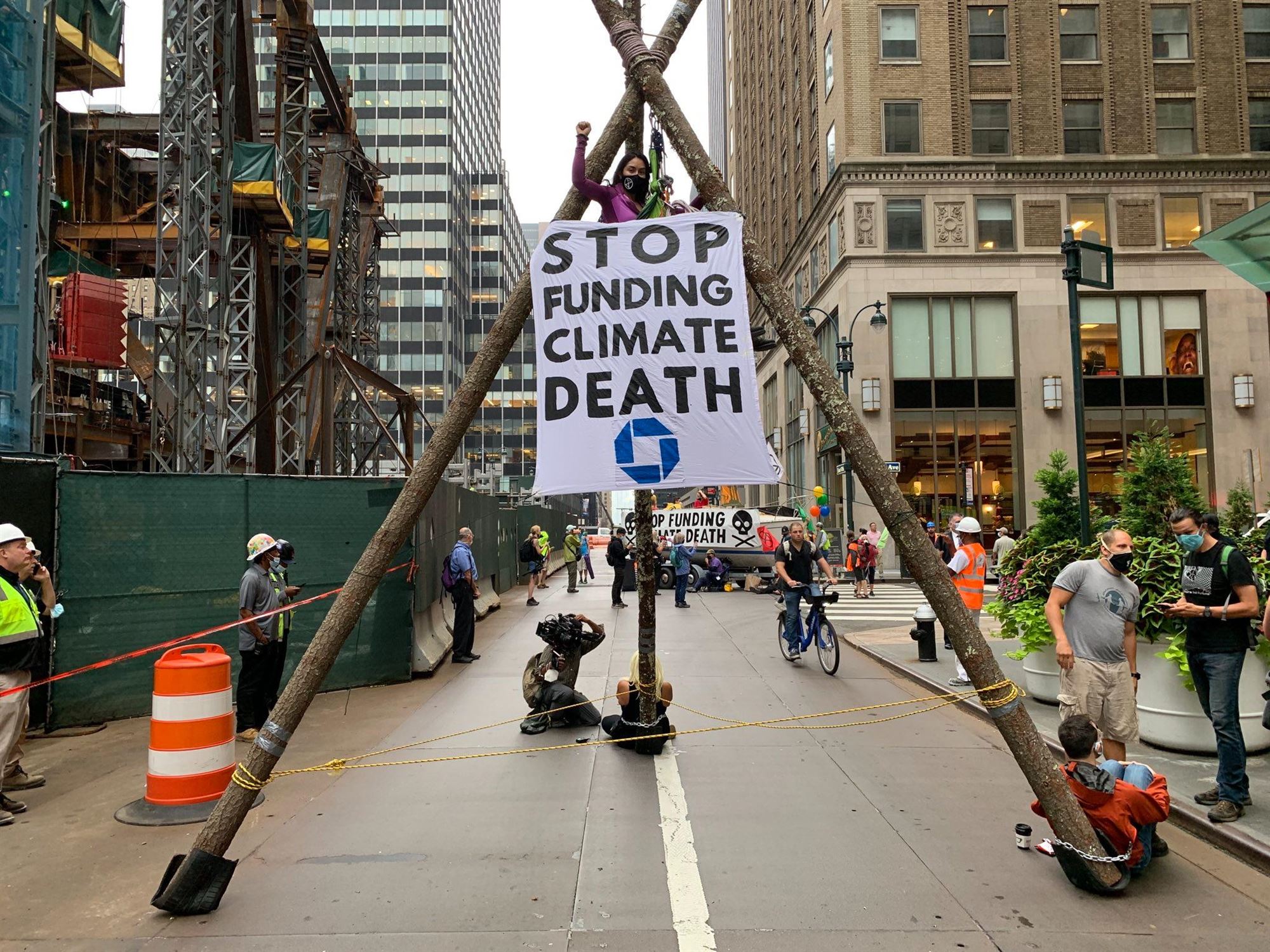 The hardest part was not knowing how long it would last, not having anything to do. We tried to converse between cells, but the sound echoed and it was impossible to hear each other. A few times my arresting officer showed up, looking harried, to give me a vague explanation about the paperwork, apologize for long wait, or to assure me she was making progress. I tried to nap, did some calisthenics, thought about food and all the work I could be doing, sang some protest songs. Around 4 p.m. the female officer brought us each a bag with two dried out peanut butter sandwiches. Could have been much worse.

As I waited, I also ruminated about what exactly I had accomplished by my arrest. The theory of radical  protest was considerably more motivating than the reality, especially as it stretched into its ninth hour. We definitely inconvenienced the NYPD, but did we make a dent on the JP Morgan Chase empire? The officers who booked, charged, processed and guarded us spent many extra hours on job; they also surely had better things to do on a Friday night. Our message was forceful, but would it change any minds if not fortunes? As the largest funder of fossil fuels, JPMorgan Chase has a whopping $317 billion dollars invested in projects like the Line 3 pipeline through the Anishinaabe peoples and nations. Were any of them listening?

I’ll be honest, in the cell, I decided I’d never do this again. But as I’ve continued to reflect, I’ve changed my mind. We have been petitioning, marching and strategizing for decades, yet those in power still refuse to do what needs to be done. Perhaps not this one arrest, but many, over time, building in numbers into mass civil action, will win the battle for humanity. Telling the truth, acting up, and fighting back, feel like the only tools we have left.

As she was escorting me and a fellow activist out of jail and back to freedom, my officer said to us, “You know, I admire what you guys are willing to do for your principles. I’m with you.”

I will do it again. In fact, I’ll be in Washington DC on October 10 to prepare for the People vs. Fossil Fuels week of action led by those who have borne the brunt of the harm for generations.

Jennifer Nielsen, who now lives in Morristown, works in international public health and is a co-chair of SOMA Action’s Climate Committee, https://www.somaaction.org/climate. At the SOMA Action Day of Action on September 25 at the Maplewood Club, the committee will have a panel discussion at 11:15 am of the range of ways to get involved in planet protection. Sign up here.