UPDATE: Child Struck by Car in Maplewood is Released from Hospital, Police Say

UPDATE 10/16, 4:23 p.m.: Maplewood Police issued a press release with further information about Thursday’s accident in which a driver struck a 7-year-old boy in a crosswalk.

Police issued the driver a Title 39 (Driver to Yield to Pedestrians) summons after the accident, according to Capt. Dawn Williams. “The child was walking with his mother north on Prospect Street and had fallen behind as they crossed the roadway when the collision occurred,” said Williams in the release. “As a result of the investigation it was determined that prior to the collision, the driver who was traveling eastbound on Lexington Avenue had come to a stop sign at the intersection of Prospect Street.”

There were no additional injuries in the accident, and the child was released from the hospital, according to Williams.

A child struck by a vehicle Thursday morning, Oct. 15, while crossing Prospect Street south of Springfield Avenue was not severely injured, according to Maplewood Mayor Vic DeLuca.

“What occurred this morning was horrible and thankfully the child was not severely injured,” wrote the mayor in an email. “The police are investigating the accident and will provide us with a report.”

In a release, Maplewood Police reported that the accident took place at 8:34 a.m. this morning at Prospect Street and Lexington Avenue. Police reported that the 7-year-old boy was transported to a local hospital with “non life-threatening injuries.” After an initial investigation, the release stated,  “a summons has been issued to the driver and it was determined that speed was not a factor in the collision.” The police release stated that “the crash investigation is ongoing and that no further details are available at this time.”

Many members of the public became aware of the incident when local resident Eddie Bennett posted a letter — addressed to the Township Committee and the police chief — on Facebook, calling for increased pedestrian safety and traffic calming measures for the area of Prospect Street between Concord Avenue and Springfield Avenue.

Bennett wrote that he was “angered, frustrated and shaken” after watching a mother “cradling her son face down in the street after being hit by a car in a crosswalk on [the] way to school.” He wrote that the area is subject to frequent accidents “on a monthly basis, cars have flipped into neighbors yards, an accident happened last week taking out a sign that is next to the side walk and we were scared then.”

Although the town has taken action, Bennett wrote that the raised intersection at Hilton and Prospect was ineffectual and called for the installation of speed bumps. He also said that the lighted crosswalk sign had been installed behind a tree where it was not visible.

Mayor DeLuca responded that the town had made several adjustments and was continuing to evaluate the area.

“I’ve asked the Township Engineer to evaluate if other traffic calming measures are warranted. We have installed pedestrian crossing signs, a raised crosswalk at Hilton Ave. and a flashing lights sign at the Franklin Ave. crosswalk. Prospect Street is a heavily traveled road connecting Union and South Orange,” wrote DeLuca. “I have asked the police to conduct more radar details along the road. No one is ignoring or forgetting this portion of Prospect.” 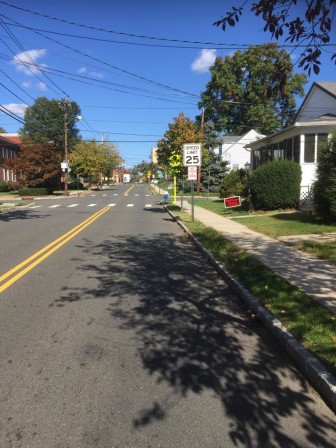 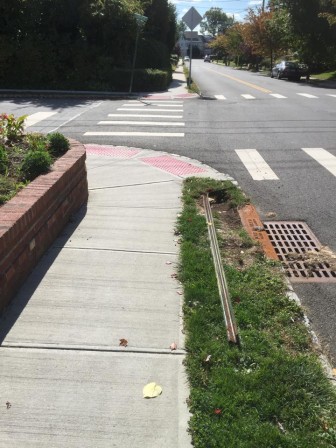 Pole knocked down at intersection of Prospect and Lexington (Eddie Bennett)