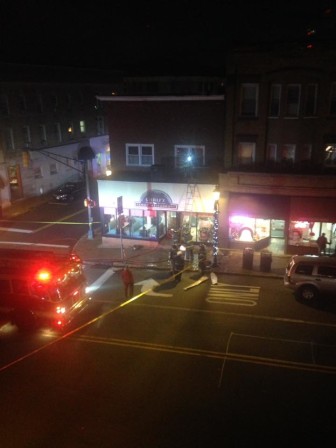 Chris’s Family Restaurant at 51 E. South Orange Avenue in South Orange Village will be closed for repairs after a fire caused significant damage to the interior of the establishment.

Acting South Orange Fire Chief Daniel Sullivan said that firefighters responded to a report of a “smoke condition” at 4:25 p.m. Monday, December 5. When they arrived, they found smoke in the basement and first floor of the restaurant.

After a search, the Fire Department located the fire within a floor and wall space on the first floor near the front of the store.

“Substantial demolition and removal of wall and floor substrate was required to locate and attack the seat of the fire,” reported Sullivan.

“This fire was located and extinguished expeditiously due to an all hands aggressive search for the condition which was not apparent on arrival,” said Sullivan. “The fire was extinguished rapidly and was followed by extensive overhaul to extinguish any subsequent hot spots and extension of fire in the area of origin.”

South Orange Avenue between Sloan Street and Scotland Road was closed in both directions by South Orange Police during the incident and re-opened around 6:20 p.m.

The fire has been classified as accidental and the cause is undetermined at this time.

Because of the damage, both the South Orange health officer and construction official temporarily suspended the business operation until repairs can be made to bring the building back into compliance with Village health and safety codes.