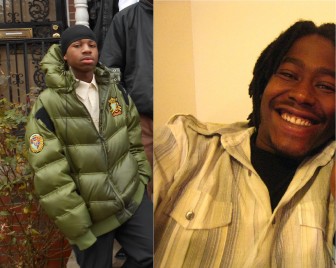 As the one year anniversary of a horrific car crash that took the lives of two young Maplewood residents approaches, the town will hold a memorial service for the victims and their families in Memorial Park.

Tamir Harry, 16,  and Kevin Noel, 21, were killed on August 6, 2013 when Harrison Allen, 20, of Montclair, allegedly ran a stop sign at the corner of Essex Avenue and South Fourth Street in Maplewood and crashed into a Nissan Sentra. Harry’s 20-year-old brother, Tashir, and Rodney Lovius, 21, also both of Maplewood, were both seriously injured in the accident.

The trees and plaque will be installed in September when the weather is conducive to planting, said Burbank.

The families expect that 100 family members and friends will attend the ceremony.

Tamir’s aunt, Marla Williams-Linton, said the families wanted the memorial to commemorate the one-year anniversary that two families lost their loved ones to a drunk, underaged driver.

Williams-Linton said her sister-in-law Pamela Ferguson, Tamir’s mother, wanted to honor her son and Kevin Noel, so they would be remembered.

“We basically don’t want Maplewood or the surrounding communities to forget two young men that didn’t have a chance to begin their lives,” said Williams-Linton in an email. She said she also wanted to remind people what drinking and driving can do, no matter what the age. “This goes for adults also who think they can drink then drive.”

The family originally wanted to create a memorial at the crash site but were told the homeowner didn’t want anything in front of his house. Mayor Vic DeLuca offered Memorial Park as a location, said Williams-Linton.

“It is important for our community to remember the tragic loss of two young lives one year ago,” DeLuca said in an email.

The ceremony will have three main speakers, including DeLuca, and anyone who wishes to speak about the two young men will be given an opportunity to do so, she said. The family will be releasing balloons and placing a sign in the spot where the plaque and trees will go.

Williams-Linton relayed a message from Tamir’s mother: “Thank you to the mayor and the township for doing the memorial tree site. And thank you to the community for all their love support, and prayers.”