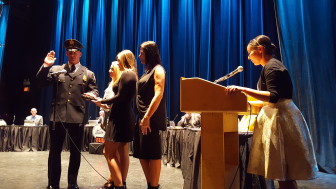 Kyle Kroll takes the oath, surrounded by his wife Lorie and daughters Kristina and Kayla. Photo by Adam Loehner

An enthusiastic crowd applauded Kyle Kroll as he took the oath of office as new Chief of Police of South Orange, NJ on Monday, October 24.

Kroll, who joined the South Orange Police Department in 1988, then took to the microphone and gave a sometimes funny, sometimes touching, often impassioned speech ranging on topics from his love of sports to his family’s history with the town to the challenges facing police officers today.

Talking to his officers, Kroll said, “I applaud you guys day in and day out for the things you do. These are hard times for law enforcement in particular.”

Kroll said that he “didn’t always want to be a cop.” His father, the former South Orange Village Clerk, had talked him into taking the exam. At the time, the younger Kroll was 22 and “this wasn’t on my radar.”

Kroll’s father passed away suddenly at age 59 while still serving the town.

Kroll was modest about his abilities, but said, “The advantage I do have is sports. It builds something in you, that teamwork that you can’t get anywhere else.”

The new chief noted that the fun aspects of the job of policing were soon tempered with reality the longer he served.

“When I first came on the job. It was fun. You get the bad guy. … but it wasn’t what I imagined. One incident changed my outlook on the job. It’s not just about bad guys. But there’s things that officers do everyday that you never seen in the newspaper.”

The incident that changed him was finding the body of a young mother in her home.

“I was called to a house after a few years on the job in the detective bureau. A man couldn’t contact his daughter. He couldn’t get into her house. … I found his daughter deceased in the bed. She was in her early 30s. She had her 2-1/2 year old daughter trying to wake her up and she was 8 months pregnant.”

When the husband made it home, Kroll said the medical examiner did not want to let him into the room — “thinking about it is as a crime scene.”

“He came in and medical examiner said, ‘You can’t let him in, it’s a crime scene.'” But Kroll made the call to let the man see his wife: “I watched this man hold this woman in his arms. His wife and his baby.'”

“I’m happy to say that I’m a part of the brotherhood. I owe it all to them out there.”

Kroll then thanked his family — his wife Lorie and daughters Kristina and Kayla — as well as all the Village Trustees and Village administrative staff, citing each by name.

Village President Sheena Collum said that the Trustees found appointing Kroll to be an easy decision. “We talked about his level of passion and commitment being unparalleled. … Each one of us up here has been greatly impacted by his work.” Collum told Kroll, “We have 100% confidence (in you).”

He added, “I’m a fighter and I will fight to keep this community as safe as possible.”