The South Orange Police Department promoted two officers at the Board of Trustees meeting Wednesday night.

“I know the role of a police officer nowadays is a challenging job,” said Chief James Chelel in introducing the officers. “[They] are called on to make split-second decisions…it’s a difficult job and I’m very proud of the work these officers do.” 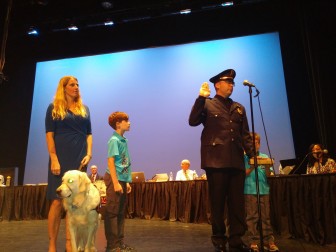 Dolinac, a graduate of Columbia High School and Rutgers University, is a 12-year-veteran of the department. He was promoted to Sergeant in 2010 and has received numerous commendations from the SOPD. Dolinac took the oath of office accompanied by his wife, two young sons, and their dog.

Officer Daniele Grasso attended Our Lady of Sorrows, Seton Hall Prep, Seton Hall University and Essex County College. A 16-year veteran of the SOPD, he began as a dispatcher, and his brother is a South Orange firefighter. He took the oath of office accompanied by his wife.

“I always remind the officers…to treat everyone with dignity, respect and fairness,” said Chelel, “and that’s what I know that every…South Orange Police officer does on a daily basis. We have the ability to make a positive impact on someone’s life every day, and I think that’s what happens here in South Orange.” 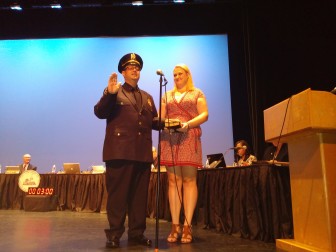 Collum noted that the town had a very dedicated police department with strong connections to the community and to residents. She singled out the Positive Behavior Citation program and Coffee with a Cop as two initiatives the SOPD runs to strengthen its community relations.

“We hear all the time how our residents…respect this department,” said Collum. “You treat them well and you treat them fairly…We are very proud of the SOPD, we stand behind you.” Speaking to the officers’ families, she said, “Thank you for allowing our Village to receive and reap the benefits of such dedicated public servants.”