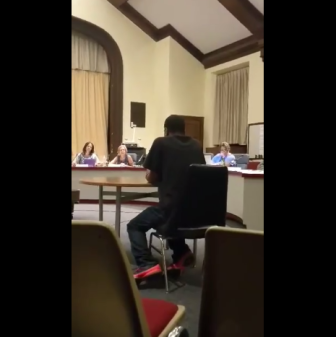 CHS English teacher TJ Whitaker addresses the South Orange-Maplewood Board of Education at the August 22 Board of Ed meeting.

In his comments to the Board of Education, Whitaker said that “a close friend” of students participating in the July 12 #NotInOurTwoTowns event held at South Orange Middle School was profiled as he exited his home in South Orange hours after the event. Whitaker alleged that the young man, at 6’4″ with dreadlocks, “allegedly fit the description” of a 5’10” man with close-cropped hair. The young man was questioned outside his home in a “predominantly white neighborhood,” said Whitaker, and taken into custody for five hours and then released after he “paid an unpaid ticket.”

Whitaker alleged that the police violated the #NotInOurTwoTowns pledge that they had signed and called the July 12 event an “orchestrated charade.”

Whitaker also cited a July 5 incident that occurred after the Maplewood fireworks.

Whitaker also thanked the school district’s information officer Paul Roth as well as Board of Education members Chris Sabin, Johanna Wright and student representative Filip Saulean for attending the first MAPSO Freedom School event on August 13. Whitaker said that MAPSO Freedom School is modeled on the freedom schools of the civil rights movement of the 1950s and 60s that were part of an effort to educate and organize young African Americans to participate in the movement.

The August 13th event, which was intended to “begin to move the conversation on race and community policing,” included parents, students and teachers, but not local police.

Village Green has reached out to Whitaker for further comment but has not yet received a response.

“The Maplewood Police Department considers all allegations of police misconduct to be extremely important and investigates all such allegations in accordance with the NJ Attorney Generals Internal Affairs.Guidelines On July 5th, Maplewood Police officers responded to various reports of disorderly conduct, fighting, the failure of large crowds to disperse and various other violations of the law. Several arrests were made on that date. The Internal Affairs Unit of the Maplewood Police Department is currently conducting an investigation into allegations regarding police activities on the date of July 5, 2016. Upon the conclusion of the the investigation the results of the investigation will be disseminated according to the NJ Attorney Generals Internal Affairs Guidelines.”