From the South Orange Village Administration: 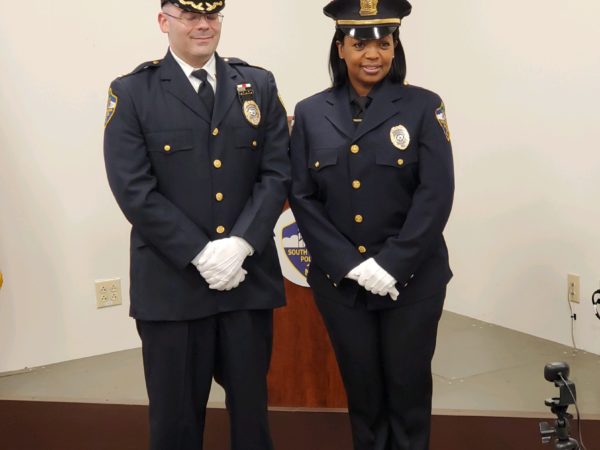 Sergeant Reaves was sworn in at the South Orange Police Headquarters on Monday evening, June 14 by Acting Police Chief Steve Dolinac, Village President Sheena Collum, and her husband. Approximately 30 family members, friends and fellow officers were in attendance at the ceremony. 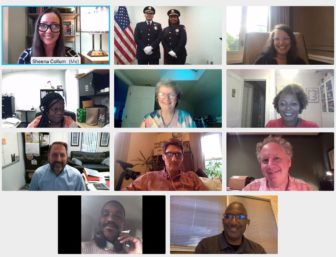 “As a front-line supervisor Sergeant Reaves takes on a position of enormous responsibility, that of ensuring that the daily public safety work of this agency is carried out effectively and efficiently,” said Acting Chief of Police Dolinac. He also expressed his confidence that “Sergeant Reaves will continue to live up to the ideals expressed in SOPD’s mission statement, P.R.O.U.D: Professional, Righteous, Outstanding, Understanding, and Dedicated”

Village President Sheena Collum added, “We are so proud to have you in a leadership role at SOPD, not only because you are the first female in this position, but also because you bring heart, soul and compassion to the job.”

Trustee Donna Coallier, chair of the Health and Public Safety committee praised Reaves leadership, “Leadership like yours, as it relates to community outreach is so important to our community. We’re proud and excited to have you in this position.”

Sergeant Reaves, an 18-year veteran of SOPD was also the department’s first female detective, after being promoted in 2020.

Reaves expressed her gratitude for all the love and support she’s received and added, “It’s an honor and a privilege to be able to serve and protect such a beautiful town. I will continue to serve and protect the community of South Orange to the best of my ability. This is only the beginning for me. Who knows, maybe I will be the first female chief of police.”