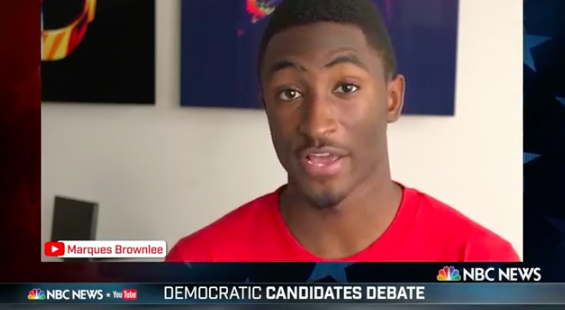 Brownlee’s participation was part of a special approach to the debate that reflected the fact that it was co-sponsored by YouTube (along with NBC News) and was the first debate of the primary to be live-streamed on social media.

Here’s how Time.com described Brownlee’s contribution (which happens at 2:27:00 in the video):

Brownlee, a gadget reviewer, used his technology expertise to ask a question about whether tech companies and the government can find a middle ground over encryption, which sets up a debate between privacy and security.

Former Maryland Gov. Martin O’Malley responded to the question, calling for protection against unwarranted government interference. “Our federal government should have to get a warrant, whether they want to come through the back door or your front door,” he said.

At 2:29:00 in the video, Bernie Sanders also had a lengthy response to the question noting that, although he voted against the Patriot Act, he wanted to work with Silicon Valley to “help us to make sure that information being transmitted through the internet … by ISIS is discovered … without violating the constitutional privacy rights of the American people.”

Clinton used her answer (at about 2:34:00) to pivot into an attack on Donald Trump and other Republican candidates. After first noting that “we need better intelligence cooperation [with Silicon Valley and allies],” Clinton said, “and then we’ve got to recognize that our first line of defense against lone wolf attacks is among Muslim Americans, and it is not only shameful it is dangerous for the kinds of comments you’re hearing from the Republican side.”

Brownlee, by the way, is the son of Maplewood Township Committeeman Marlon K. Brownlee, who noted that Marques “has been running around a lot of late…in the last month alone, besides his ongoing video reviews he’s interviewed Kobe Bryant, met Neil DeGrasse Tyson, and attended the big annual consumer electronics show in Las Vegas!”

See Marques Brownlee’s full question and the response starting at 2:27:00 in the video below or here.