The Columbia Cougars took on their rivals, the Millburn Millers, Friday Oct. 9 at Underhill Field. It was Senior Night for the Cougars, and a limited crowd of parents and family was allowed into the game to be a part of ceremonies honoring the group of players. The first home game in an uncertain season amidst a pandemic, in conjunction with the acknowledgement of these seniors, made for a very emotional pregame atmosphere. However, it was all business on the field for the now 2-0 Cougars as they handled business against a physically overmatched Millburn team. 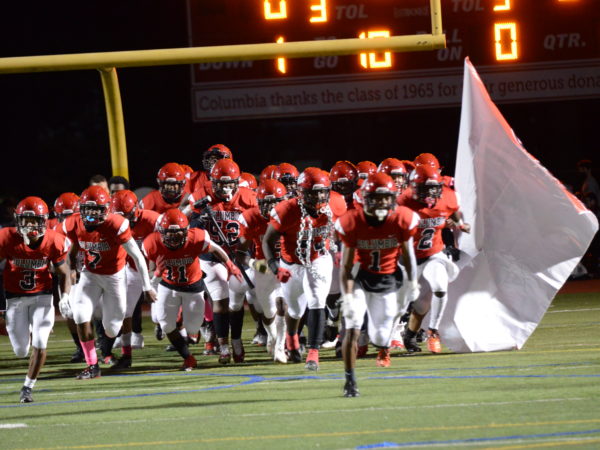 After senior night festivities, the Cougars take the field.

The offense provided fireworks early, as senior quarterback Nick Aaron audibled at the line and dropped a 25-yard pass into the hands of receiver Jahqiel St. Cyr. A few plays later, junior running back Stephen Henry punched in a short touchdown run, and Columbia went up 7-0 within two minutes. On Columbia’s second possession, Aaron went down with a knee injury, and did not return for the rest of the game. Kai Arrington stepped up to lead the offense, drawing on his experience doing so as a sophomore. Millburn would answer right back to end the quarter, but missed the extra point. Setting up shop inside the 30-yard line, Stephen Henry cashed in his second touchdown of the night. Thanks to stellar blocking from the offensive line, Henry simply outpaced several hapless defenders.

With 3:40 to go in the half, Millburn was able to score on a wheel route thanks to a blown coverage. All of a sudden, with a key offensive piece in Aaron out of the game and only up by one heading into half, the Cougars appeared vulnerable. However, Columbia fans know better than to expect this team to roll over when they face adversity, and Millburn learned this the hard way on Friday night. It would take only the third snap from scrimmage with under 2:00 to play for Columbia to extend its lead with authority. St. Cyr caught a screen pass and split between two impressive perimeter blocks, taking the ball 72 yards to the end zone. This would end up being one of the longest passes in the state of New Jersey last week. 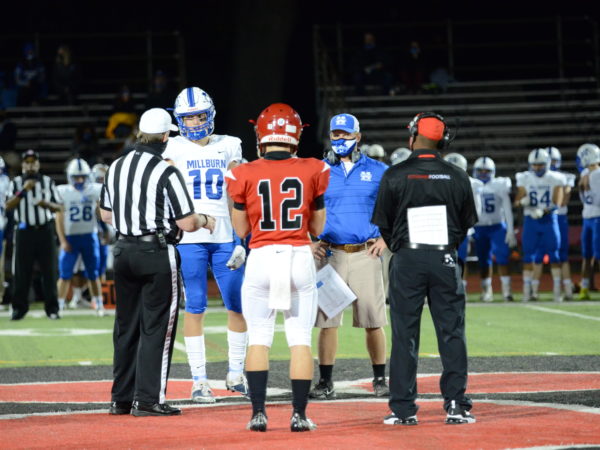 COVID-19 guidelines from the NJSIAA limit the number of players who do the coin toss. Here, just senior Nick Aaron, 12, goes out to do the job.

Although the offense put up more points thanks to a gutsy run from Joe Holdbrook, the defense was the star of the show in the second half. After making halftime adjustments, it allowed zero points, came up with a momentum-shifting interception, and recorded several sacks and pass breakups. In the third quarter, senior Rudolph Lundy tracked down an overthrown ball, bobbled, and ultimately came up with the pick to set up the drive on which Holdbrook scored. The defensive line of Justin Anderson, Chris Byrd, David Fadael, and Zamar Grove proved to be much more of a factor in the second half, coming up with several sacks and TFLs to stall Millburn’s attempts at a comeback.

Tristan Reynolds seamlessly made the transition from safety to playing in the box, recording an important sack. The secondary also came up big, as Owen McGuffey and St. Cyr turned in key pass breakups in the red zone. Down 15 with a few minutes to go, Millburn resorted to trick plays to make up the deficit. A hook-and-ladder play (in which a receiver catches a short route and then laterals to a running back) nearly caught Columbia’s defense off guard until Stephen Henry forced the ballcarrier out at the two-yard-line.

This year’s iteration of the Cougar defensive line appears to be even more dominant than last year’s — a scary thought for any opponent. The Cougars powered their way to another sack, and this time the ball was knocked free and recovered by Zamar Grove. Arrington and the offense came back on for a curtain call, kneeling to kill the clock and escape this ugly win. It was somewhat of a Pyrrhic victory for the Cougars, as the team came away with the all-important first conference win, but lost its starting quarterback to injury. Aaron’s injury status is unclear as of now, but it can be assumed that it will be Kai Arrington under center for at least a few weeks. Columbia travels to play Belleville at 7pm this Friday, Oct. 16. At press time, masked and socially distanced fans are welcomed at Belleville.

CHS Cheer makes sure the team had a visual presence at the start of the game.