The following is from a team parent:

Columbia High School Boys’ and Girls’ fencing teams swept the 2016 NJIFA Team Championships with the Boys’ team winning the Cetrulo trophy for the fifth year in a row and the girls’ winning the Santelli cup for the third year in a row. 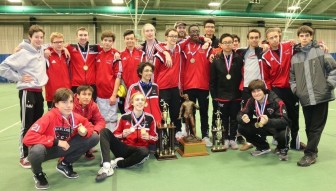 The CHS girls’ fencing team maintained their winning momentum in their dual meets. They had a strong start against Kent Place in the first round with all epee fencers Lynch, Cowie and Wendt winning all their bouts. When in the second round foil fencers Garrison, Banks and Hyppolite, won their bouts they spurred both Lynch and Cowie to win their bouts in epee with Cowie clinching at 14-4 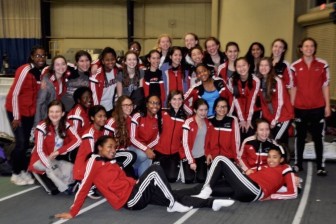 In the dual meet against Montclair Kimberley Academy there was no actual clinching bout due to the eight forfeited bouts by MKA including the 14th bout. The final score being 20-7 Foil fencers Viquiera, Pham and Aguba and Epee fencers Merelman, Lynch and Schneider won all their bouts in both the first and second rounds.

When the CHS girls’ fenced against Montclair high school, the outstanding fencing by foil fencers Viqueria, Pham, and Garrison winning all their bouts in the first and second rounds culminated in Garrison finally clinching in the third round 14-8 after winning her bout 5-2.

After the winning Cetrulo the CHS boys met with a couple of challenges in their dual meets. In the first round of their meet against Oratory Prep School all three epee starters Abdill, Ogbeifun, and DuBowy won their bouts which in turn spurred on victories in the second round for foil fencers Sole-Torres, Moramarco and Wasden resulting in epee fencer Adam Dubowy clinching at 14-4. All epee bouts were won by CHS including those of the three epee alternates Anthony Jackson, Elijah Navlen, and Oscar Renda post clinch.

In the dual meet against Montclair High School foil fencers Soles-Torres, Moramarco, and Wasden demonstrated strong fencing in the first round winning all their bouts and despite consistent victories by Woods and Abdill by the end of round two, the score was tied at 9-9. All fencers worked hard to gain the lead but were finally defeated by Montclair 13-14.

The CHS boys’ meet against Millburn High School proved difficult with a too close for comfort first round of 5-4 with excellent bouts by Woods, Benskins, Soles-Torres, Wasden and Abdill. In the second round saber fencers Rothenberg and Woods worked hard to put CHS in the lead 7-4 Soles-Torres and Moramarco showed some outstanding foil fencing in the second round winning their bouts but despite the strong effort put in by the epee fencers, the second round ended again with the tie of 9-9. In the third round Millburn proved to be too strong defeating CHS 14-11.

The CHS boys’ fencing team had a close call against Montclair Kimberley Academy with a couple of their starters absent. In the first round saber fencer Dean Gillette demonstrated some strong fencing winning his first bout, and the score was 5-4 at the end of the first round. Despite all three bouts won in the second round by epee fencers DuBowy, Ogeifun and Abdill the score remained too close for comfort at 10-8. DuBowy finally clinched in his final bout 14-13.

A strip foil fencer Tran Soles-Torres and A strip epee fencer Josh Abdill both came third and qualify for the individual state championships.