From the Cougar Soccer Club. This report is for the weekend of October 2-3, 2021:

Goalkeeper Eric DeVomecourt led a stifling Cougar SC defense as it posted two shutout victories to stay undefeated in league play. The Boys U14 Premier team topped Verona, 1-0, on Saturday and followed up with another 1-0 victory against the Americas SC on Sunday.

Christian Balmir, Logan Saby, Nathanial Wack, Isaac Lesser and Jack Small shutdown Verona in front of DeVemecourt. The winning goal came midway through the first half when Henry Shorts emerged from a scramble for the ball about 15 years from the Verona goal. Short connected, knocking the ball to the opposite upper corner for what turned out to be the lone goal of the match.

The team hit the road again Sunday to face Americans SC in Saddle River. Newcomer Logan Sackett made the difference in the game when he broke free down the wing, beat a defender and then crossed the ball to Balmir in the box for a goal.

The Boys U14 Premier team moves to 3-0 in the league and is the only undefeated team remaining in their flight. 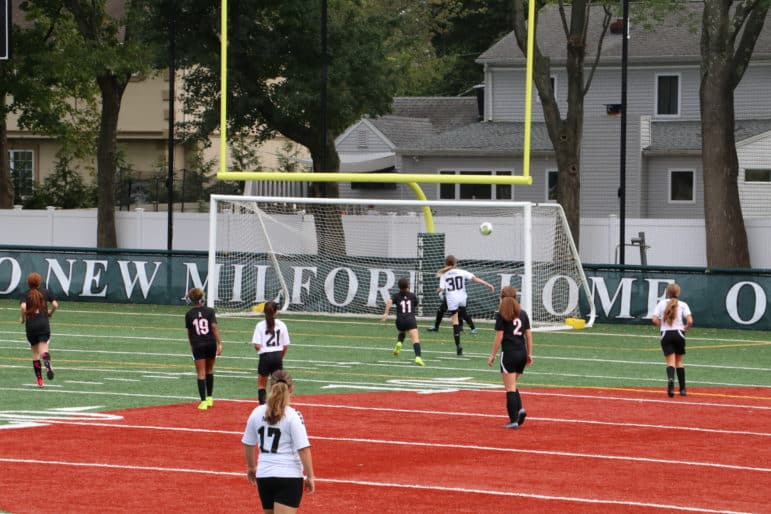 Vivian Kubany (11) scores one of her three goals on the artificial turf field in New Milford during Cougar SC’s 6-0 win on Sunday. Also pictured are Sydney Davis (19), Claire Wisell (2) and Finley Friedman (7).

The Girls U14 team donned special black and pink jerseys for breast cancer awareness and maintained their winning ways in a 6-0 victory on the road over New Milford. The victory moved the team into second place in the flight.

First place will be up for grabs on Oct 17 when Cougar SC hosts the first-place Warriors at Orange Park.

The Boys U13 Elite Team improved to 2-1 on the season with a 3-1 win against Ironbound.

The Girls U13 Premier team split a pair of tight matches this weekend, with a 2-1 victory on the road against Montclair on Saturday followed by a 3-1 loss to first-place Harrison at home on Sunday.

Against Montclair, Shayna Campbell broke a 1-1 tie in the second half with a powerful run from midfield, snaking her way past several Montclair defenders and striking a right-foot shot inside the near post for the game winner. Sienna Parker opened the scoring in the first half off a great long-distance assist from Sahana Lynch, before Montclair answered to tie the game at the half, 1-1.

Lynch, Amelia Stetson, Olivia MacWhannell and Charlotte Zimmerman anchored another stellar defensive performance, alongside Hazel Levy who enjoyed a standout outing in her first appearance of the season following a pre-season injury.

On Sunday, Harrison, the flight’s top team, pulled away in the second half from the short-handed Cougar SC to pick up the win on the turf at Orange Park.

The Girls U13 team, down four players, battled Harriosn to a 1-1 draw at halftime. Harrison opened the scoring on a corner kick but Lila Clammer scored to tie the game. Clammer was playing up from the U12 team.

Levy, JoJo Henry and Lola Karp-Foster filled in at goalkeeper for the game while Sydney Kwan put in another tireless performance in attack.

The Boys U12 Premier team picked up its first league win with a 2-1 victory against Ajax.

Paul Chandeysson cuts up the field against Teaneck on Sunday during Cougar SC, 7-1, victory at DeHart Park. Aaron Scott (28) is also pictured. Chadeysson scored five goals in the win.

Paul Chandeysson scored five goals to lead a dominating offensive performance as the Boys U12 Pro team picked up a 7-1 win against Teaneck at DeHart on Sunday. Cougar SC (3-0) took over sole possession of first place in their flight with the win. Jake Whitehead and Rohan Wolfe led the defense

The Boys U11 Pro team took over sole possession of second place in its flight with a 3-2 victory against Hotspur. 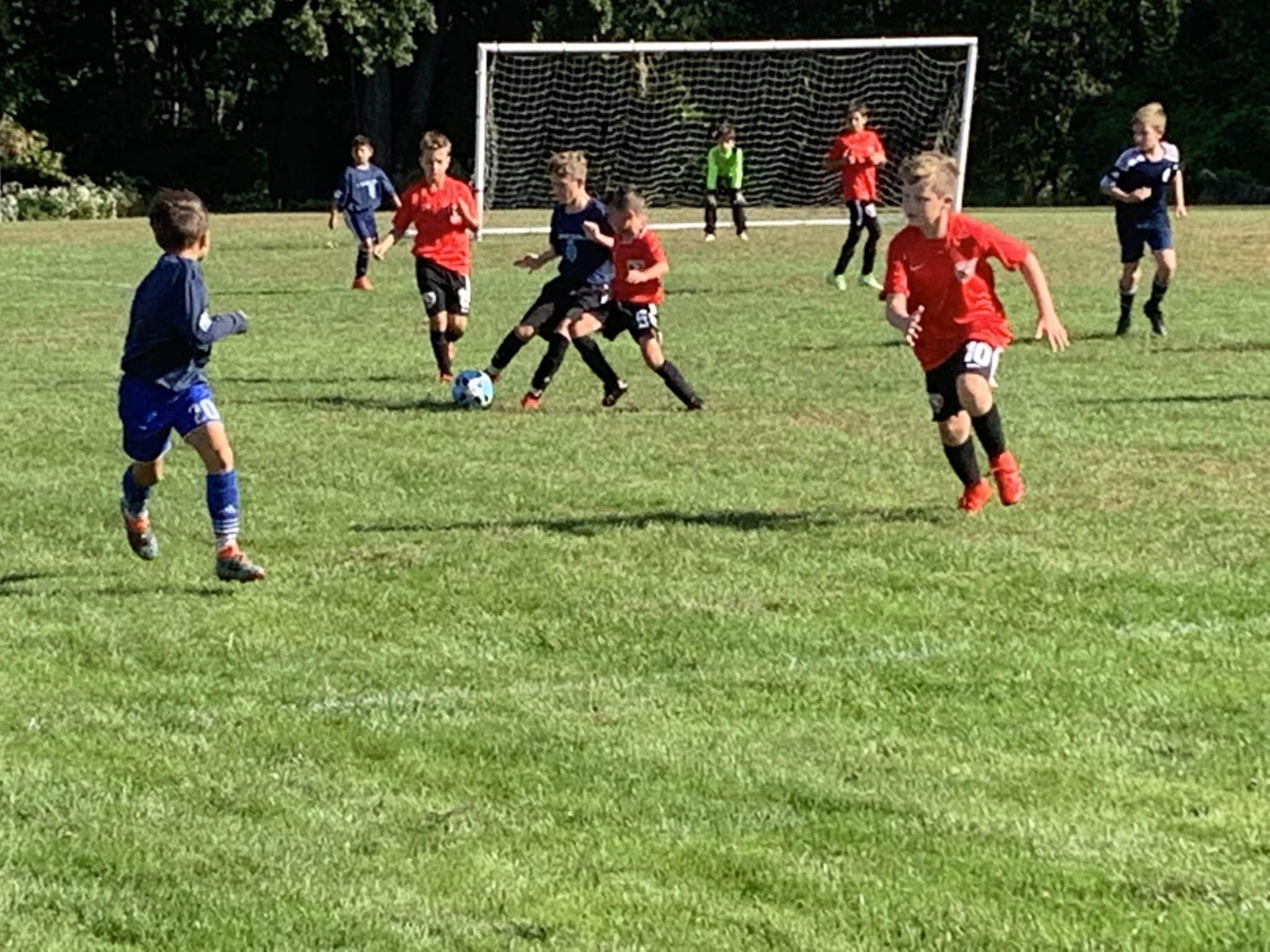 Boys U11 team: Yaya Medd (5) and Brody Angevine (19) close on a Spartans player while Malcom Spitser runs down field during Cougar SC’s 6-3 loss on Saturday.

Cooper Schwartz scored twice and Brody Angevine also scored but the Boys U11 Elite team dropped its first league game, 6-3, on the road against Spartans on Saturday. The Spartans strong passing game helped them open a lead as the Cougar counterattacks couldn’t quite finish scoring opportunities.

Effective passing out of the midfield by Gilmore Morales and Yaya Medd broke Schwartz open for his goals while Idan Saadia assisted on Angevine’s tally.

Cougar SC spent most of a tough match against Maywood in its own defensive end, fending off a consistent Maywood attack and falling 3-0 at DeHart Park Sunday. The Girls U11 Premier team (0-2-1) returns to action on October 17 on the road in Fair Lawn.

Matai Zorel led Cougar SC with two goals in a back-and-forth match with Glen Rock that ended in a 2-2 tie on Saturday at Borden Park.

Glen Rock (2-1-1) took an early lead before Zorel tied the game heading into halftime. Zorel’s second goal of the game gave Cougar SC the lead but Glen Rock battled back to tie the game late. The Boys U10 Pro team (2-0-2) remains undefeated this season and retained second place in the flight, one point ahead of Glen Rock.

Cougar SC returns to action on Oct. 16 when it hosts Spartan at Borden Park.

The Boys U10 Premier team hit the road for the first time this season but midfielder Lucas Alvarado made himself right at home with his first hat trick of the season in a 4-2 win against Kearny Thistle on Saturday. Cougar SC (3-0) got three assists from midfielder Mason Kobrin as it retained sole possession of first place in its flight.

Cougar SC jumped out to an early 2-0 before Thistle cut the lead to 2-1, just before halftime. The home team controlled the early play in the second half before Hudson Miele took over on defense to shut down Thistle and get the Cougar offense rolling again.

The Boys U10 Premier team will host Nutley United SC on October 16 in its toughest test of the season. Nutley has the highest scoring offense in the flight through the first month of the season. 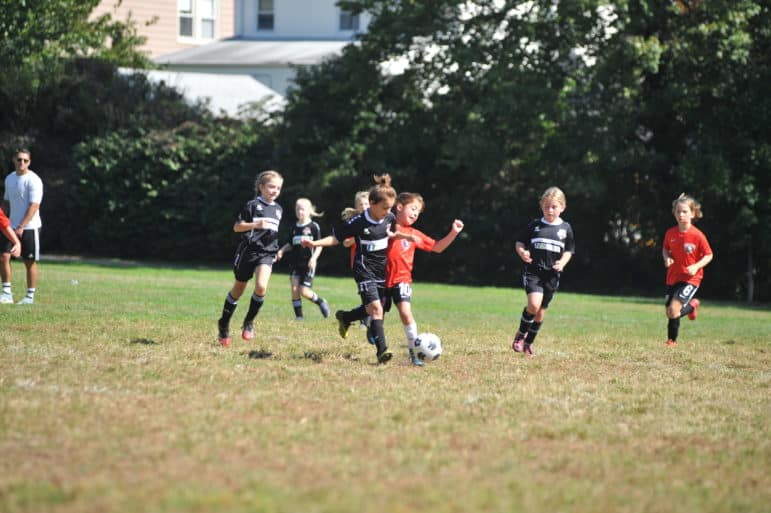 Morgan Druck scored her third goal of the season off a cross from Amelia Connolly but it wasn’t enough in a 4-1 loss to the Dragons on Sunday in Borden Park. Stella LeBlanc and Ava Robinson had several strong runs in the second half to open up scoring opportunities for Cougar SC but the team couldn’t find the back of the net.

The Boys U9 Elite team dropped a close match the Kearney Thistley, 1-0.

Goalkeepers Charlotte Kelly and Emily Maguire combined to shut out Kearny Thistle as the Girls U9 Premier team picked up its first victory of the season, 2-0, on Sunday at Borden Park. Matilda Spitser and Jane Kessler fought hard to each pick up a goal as Cougar SC improved to -1 on the season. The Girls U9 Pro team hosts a pair of games on Oct 16 and 17, facing North Valley on Saturday and Bloomfield on Sunday.

The Girls U9 Pro team dropped a tight 2-1 game to AYSO Bergen before losing to RiverDell, 6-1.