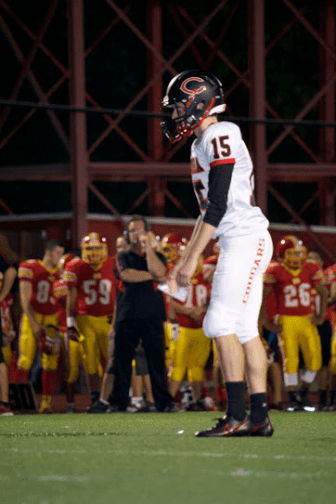 Junior kicker Marc Steiner nailed a 28-yard field goal late in the fourth quarter and the Columbia Cougars’ defense stiffened until the clock wound down to collect a hard-earned 24-22 victory over North Bergen last Friday night.

Everyone associated with the Cougars program hopes that the win will give the 1-1 squad the confidence they need to compete Saturday against fellow Super Essex Conference competitor Orange High School at Underhill Field.

Steiner’s three-pointer capped the scoring in a tense game against North Bergen, which jumped out to an 8-0 lead after Alex Fuentes scored on a two-yard run. Columbia countered in the section quarter with a 13-yard score from Martin Battle and a 28-yard burst from Kiambu Jones.

In the third quarter, Fuentes scored again, only to be topped by Battle’s 17-yard run for his second touchdown, giving Columbia a 21-14 lead going into the fourth quarter.

North Bergen quarterback Kyle DeOrio struck back with a 20-yard pass to Nathaniel Zamot. The two-point conversion gave North Bergen a 22-21 lead. Not to be outdone, Columbia drove deep into the Bruin’s half of the field before stalling on the 11-yard line; with 1:30 left of the clock, Steiner drilled the field goal to give Columbia the 24-22 lead. North Bergen began a frenzied drive to score, but the Cougars’ defense stiffened and sealed the victory as time expired.

Now, the Cougars face Orange on Saturday, looking to avenge the 46-21 drubbing they suffered at Orange last season. The Tornadoes are 2-0 and ranked 7th in the conference. A Cougar victory will go a long way toward helping the program continue its steady progress under second-year Coach John Power.

LOCAL KNOWLEDGE: Don’t park on Richmond, between Garfield and Baldwin. You will likely get a ticket.