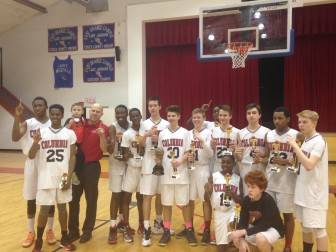 The Columbia Cougar Freshman basketball team defeated the Seton Hall Prep Pirates 42-39 to win the Essex County Freshman Championship held at East Orange High School on February 27. It was the first time that Columbia has won the Freshman tournament.

The win capped a fantastic 17-3 season for the Cougar freshmen and coach Mike Dreschel. The game came down to the wire with Kaya Esgun, Connor Thompson and Brandon Dalambert hitting big shots down the stretch. With less than a minute to play and up by one, Cougar Luke Hayes made a half court in-bounds pass to a streaking Esgun who converted a wide open lay-up to put the Cougars up by three to stay.

Coach Dreschel had this to say about the team: “They were a true team. There wasn’t one player that any team could focus on to stop us because they’re all very good and they play together so well. They didn’t care about individual statistics or accolades, but more about what they could do to help the team win and get better as a team. They were always willing to make an extra pass, almost to a fault sometimes, but it showed the team chemistry and care they developed.”

Dreschel also expressed pride in the Freshmen team’s maturity: “They also didn’t shy away from big moments. They always wanted more and more in the way of being challenged. And the three times we lost or any of the difficult times we faced in games, they always came closer together and those tough times only made us stronger. They were willing to do whatever I asked them as a coach and they were completely all in for each other. They enjoyed the success of each other and the team more than their own. It was awesome to be a part of and witness. As a Columbia alum, they did the school and basketball program extremely proud. I’m honored and proud to be their coach.”