Kritzberg Sworn in to Second Term as BOE Student Rep

A familiar face will sit alongside the South Orange-Maplewood School Board for a second year in a row. 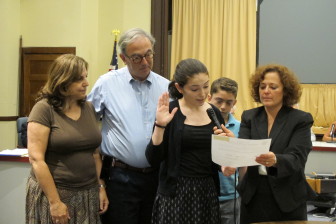 Maggie Kritzberg, a senior, was sworn in as Columbia High School’s student representative to the South Orange-Maplewood Board of Education on Monday. She was surrounded by her family as she took her oath of office in front of the board.

“It feels great,” Kritzberg said. “I’m just really happy that I get another opportunity to represent the student body and to be their voice in all of the different conversations that the board is having.”

High School students cast their votes for Kritzberg to take the position for a second consecutive year.

As the school year begins, Kritzberg said she has multiple topics on her radar. She wants to make sure that students in the high school “have a voice in the superintendent search” and that “students feel that they are not only represented, but that their rights are being respected.” 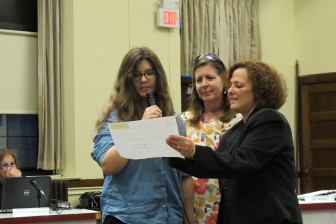 Backing up Kritzberg will be Mia Goldstein, also a senior, who was also sworn in Monday as the student representative alternate.