When local “professional storyteller” Angela Matusik heard about the “letters to your future self” program that teachers Richard Palmgren and Maureen O’Sullivan lead at Maplewood Middle School, she instantly knew that it was a story that should be amplified: “I was fortunate enough to be able to pull in two incredible local filmmakers (and SOMSD parents), Tom Mason and Sarah Klein, from Redglass Pictures — and together we produced a two-part series, called Dear Future Me.”

Matusik, who is Head of Corporate Brand, Content & Creative at HP, says the films “beautifully represents our vibrant, diverse community and provides hope and inspiration during these uncertain times.” She asked that Village Green “share these films with the SOMSD community, so everyone can celebrate these wonderful kids.”

For 26 years, social studies teacher Palmgren has asked 6th grade students to write letters to their 12th grade selves. He holds onto the letters then mails them to the students after six years (as does O’Sullivan). According to Palmgren, he had heard back from a few students over the years about the impact of the letters, but had never seen a letter opened in person. “To finally see the impact on kids — it just had an amazing amount of impact on me,” Palmgren says of the films.

Palmgren says he was inspired to create the project by his mentor, Robert Caiazzo, “a science teacher who was enchanted with the idea of writing to one’s future self being like time travel — very slow time travel.”  Caiazzo unfortunately died suddenly at age 46, prompting Palmgren to begin the project as a tribute. English language arts teacher Maureen O’Sullivan later joined the project.

Every June at Maplewood Middle School in suburban New Jersey, 6th-grade students participate in an end-of-the-year rite of passage: they compose a letter to their future 18-year-old selves. This extracurricular assignment not only encourages middle schoolers to reflect on who they are, but to imagine who they might become. After the letters are written and sealed, two dedicated teachers safely lock them away for six years….and wait. When these same students are young adults ready to graduate high school, the teachers mail the letters back to their authors.

For 25 years, no one was allowed behind the curtain to witness the poignant moment when the contents of these letters are revealed, until now. Filmed during the COVID-19 pandemic, the letter tradition takes on an even deeper meaning during our uncertain times, as the students grapple with quarantine rules, safety concerns, and missing daily real-life contact with their friends and teachers. 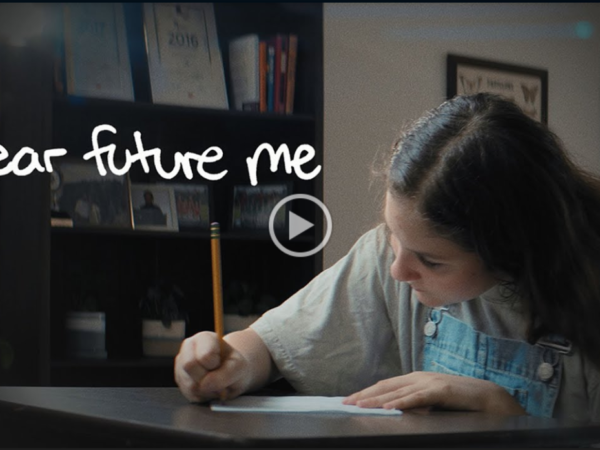 DEAR FUTURE ME, a new documentary short film in two parts, features both high school seniors opening their prophetic letters and 6th graders writing to their future selves. The results are surprising, engaging, emotional and most of all, heartwarming. But even more than reminiscing about their middle school selves, the letters prompt reflections on identity, race, sexuality and just how much growing and changing kids do in six short years.

The parents, students and school district granted award-winning directors Sarah Klein and Tom Mason special permission to film this ritual. According to Mason, “2020 has changed all of us in profound ways, and that really comes to the surface for these kids. For the seniors, it’s a clear sense that their more innocent, younger selves could never have imagined that things would turn out this way… For the 6th graders, these letters highlight how difficult it’s been to go through all this at such a formative age… but they still manage to have fun riding bikes, building forts, and just being kids. It’s a resilient spirit that I think we can all take a page from.”

For HP, whose mission ‘Keep Reinventing’ shines through in watching these students’ journeys unfold, DEAR FUTURE ME is a natural extension of the company’s commitment to connecting audiences through the power of stories. “Storytelling is a longstanding pillar of the HP brand – whether it’s our partnership with the story-driven non-profit Girl Rising or working with stellar creators to bring films like DEAR FUTURE ME to life,” explains Karen Kahn, HP’s Chief Brand and Communications Officer. “Elevating stories like these is core to our commitment to create technology in the service of humanity. These films tap into common emotion and experiences that bond us all.”

Funded by HP and produced by the Garage by HP and Redglass Pictures, the films were released on Thursday, September 10th on HP.com’s digital storytelling hub, the Garage (https://garage.hp.com/us/en.html) and select VOD platforms this fall. In addition to the films, HP has created a Dear Future Me mini-site, where viewers are encouraged to print instructions on how to write their own letters to their future selves.

Read more about the project here.