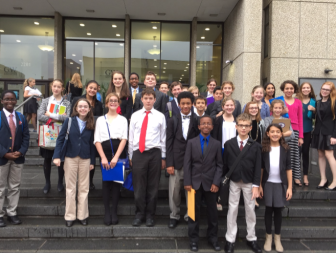 The delegates worked for more than six weeks at their after-school club preparing for the conference, which was held on November 7, 2015. More than 400 students from the District of Columbia and several states including New York, New Jersey, Washington, Virginia and Maryland participated in the day-long conference.

The students met at MMS at 4:00 a.m. dressed in the formal business attire dictated by the conference staffers. During the four-hour ride to Washington, DC, students practiced their speeches and helped each other prepare. Once in Washington, students attended opening ceremonies and then went to their individual conference rooms, where they played the roles of ambassadors, UN delegates, and famous historical figures such as former Secretary of State George Schultz and medical doctors from the Centers for Disease Control.  They debated controversial issues such as immigration, national and international security, renewable energy, and the containment of food-related illnesses. After closing ceremonies and a long ride home, students arrived at MMS tired but successful at 10 p.m.