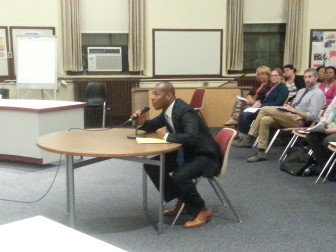 The South Orange – Maplewood Board of Education appointed Jerrill Adams as the new principal of Maplewood Middle School (MMS) on Monday night, Sept. 22. Adams replaces Jeffrey Truppo, who resigned at the end of the 2013-2014 school year.

Adams has spent most of his career as a teacher and administrator in the New York City Department of Education, according to his LinkedIn profile.

At the Board of Education meeting on Monday, Adams said the South Orange-Maplewood School District has a great deal of “hope and promise,” and told the board, “I will not let you down.”

On September 22, 2014, the Board of Education approved Mr. Jerrill Adams as the new Principal of Maplewood Middle School, effective September 23, 2014.

Mr. Adams comes to SOMSD with twelve years of experience from the New York City Public Schools where he served as a teacher, a literacy coach, a school improvement administrator, an assistant principal, and a staff developer.  As a central office administrator and educational leader, Mr. Adams has worked with principals and other school leaders across a network of 20 schools in providing professional development related to implementing instructional expectations around the Common Core Standards, using data to drive instruction, and evaluating and developing teachers using the Danielson Framework for Teaching.  During this time period, Mr. Adams also spent one year at the American International School of Hong Kong where he served as a Literacy Specialist/Department Chair where he headed a department of fourteen teachers.

Mr. Adams earned a Master of Arts Degree in Speech Communication from New York University’s Steinhardt School of Education, a Masters of Science in Childhood Education from City College of New York, a Bachelor of Science Degree in Television and Radio from Ithaca College, and a Certificate of Advanced Studies in Educational Leadership and Administration from The College of Saint Rose in New York.

Mr. Adams began his first day as Principal of Maplewood Middle School by appearing in “News on Waffles” introducing himself to students and staff and sharing his vision for the school.