The South Orange-Maplewood School District may need to spend about $750,000 more on technology for the 2015/16 school year, compared to expenditures for 2014/15.

In continuing its 2015-2016 budget planning process, the South Orange-Maplewood Board of Education discussed expenditures related to technology, enrollment projections and building capacity, Montrose School, summer programs, the Gift and Talented Program, and health care costs at its December meeting.

Business Administrator Cheryl Schneider took Board of Education members through a 27-page budget analyses document posted on the website, starting with technology.

Schneider said that she is projecting a technology request for $2.787 million for 2015/16, up from $2.033 for the 2014/15 school year. Schneider said that the request reflects the fact that the district is dealing with increased technology needs with PARCC, bandwidth, security updates, powerschool, and more. “This all needs additional support,” said Schneider.

Schneider noted that the district is planning to schedule upgrades with national and federal funding: “We are tying in our upgrades to access that [federal] money.” Right now, she said that federal funding will help with telecommunications in the next year. Another shift in the technology request had to do with Schneider’s suggestion that more tech support be located in the school buildings to help with onsite trouble-shooting, particularly around PARCC.

Schneider also said that while $2.787 million looks like a “huge increase” over last year, the required expansion of technology means “it’s getting less and less plausible to knock this number down to the $2 million range…. We’ve added over 3,000 units of Chrome books in the past year and a half. That’s a lot of Chrome books to maintain and replace.”

Board member Johanna Wright questioned the need for tech support staff in the buildings, saying there were many “tech savvy members of current staff.” However, Schneider responded, “there are a number of teachers who are extremely tech savvy but if someone has a problem while they are teaching a class they are not available.” 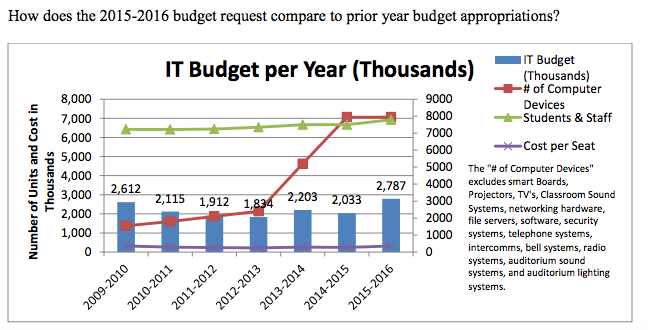 To read Schneider’s full budget analyses memo for the December Board of Education meeting, visit here.