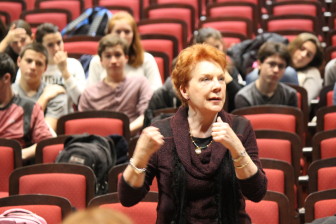 The cast and crew of Columbia High School’s production of “Beauty and the Beast” had a visit from Mrs. Potts today.

Beth Fowler, two-time Tony nominee and the originator of the role of Mrs. Potts on Broadway, was invited by show directors Bethany Pettigrew and Tricia Benn to watch the students rehearse and to bestow some advice — which the students soaked up avidly.

Of performance nerves, Fowler told the students, “Fear is healthy. Be scared, but be focused.”

She counseled them to “remember you are telling a story” and to work hard and give every performance their all, but also to remember what attracted them to the stage in the first place: joy. “This is the most beautiful, joyful musical!” said Fowler.

The students were also eager to hear about Fowler’s television work, where she currently has a recurring role as Sister Jane Ingalls on the Netflix hit “Orange is the New Black.” Fowler noted that on television “the camera sees everything you feel,” but on stage “everything is heightened.”

One student asked Fowler if she could describe the upcoming season four of OITNB in three words. Referring to her non-disclosure agreement regarding the script, Fowler said she could use four words: “They would kill me!”