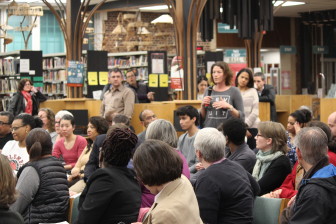 Parents first heard the term KIVA from Dr. Ramos at a meet and greet in April 2015.

Ever since newly appointed Superintendent Dr. John Ramos started meeting with teachers and parents last spring, those involved with the South Orange-Maplewood School District have been hearing a particular term:

In short, the District has described KIVA as “a human technology that allows you to retrieve a lot of information in a short amount of time. The facilitated dialogue yields honesty and forthrightness that often does not come out in normal conversation.”

With the Math KIVA scheduled for Wednesday Dec. 17 from 7-9:15 p.m. at Maplewood Middle School, District Spokesperson Suzanne Turner said she’s been getting “a lot of questions about what exactly a KIVA is and how it works,” so she created an explanation adapted from a few sources. (See Turner’s full explanation below.)

The major takeaways from Turner’s explanation seem to be that the KIVA — a term adapted from Native American tribes — creates a highly formalized process where participants must actively listen to each other before there is any critique or feedback. It avoids lecturing by “experts” and provides a means for many voices to be heard from many perspectives in a relatively brief amount of time. The KIVA is also recorded by note takers and a written document is ultimately produced.