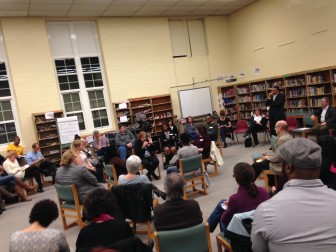 The library at Maplewood Middle School was quiet on Thursday night, but it wasn’t empty.

Community members and School Board officials sat in near-concentric circles, listening to a single speaker. One by one, each person in a circle was given the chance to answer an important question about math education and specifically, the South Orange-Maplewood School District’s math program.

The same question was asked of each person, and Superintendent of Schools Dr. John Ramos listened carefully to each response.

An event organized by Dr. Ramos, who is a proponent of the Native American talking circle-style of group communication known as “KIVA”, the session began at 7 p.m. and lasted until 9:15 p.m. The District has described KIVA as “a human technology that allows you to retrieve a lot of information in a short amount of time. The facilitated dialogue yields honesty and forthrightness that often does not come out in normal conversation.”

In simple-speak? It’s an idea-sharing methodology that is intended to promote understanding and engagement in spite of participants having different points of view.

During the intervening two hours, concerned community members — among them students, parents, and educators — answered questions that covered topics like how to address students of color being underrepresented in math performance, deleveling, and how math can play a role in an interdisciplinary learning shift in the district.  Besides Dr. Ramos, Assistant Superintendent of Curriculum Susan Grierson participated and listened intently.

“It is documented and known to students that we have to change the deficit model we are stuck in, and we know it,” said Grierson. “We focus on what kids don’t know versus what they do — their strengths versus their deficits. If they don’t know something, it can’t be the child’s fault; it’s our fault,” she concluded.

Queried a parent, “Teachers need to differentiate, but are they doing it? Are they culturally educated about students?”

It was widely agreed upon that the District needed to discourage kids from saying that they are bad at math at a young age. Another parental opinion shared addressed the achievement gap, but suggested that the District be careful not to assume that all conflicts have to do with race.

“It is difficult for a program to teach to all different levels,” said a parent. “Some get lost because they aren’t engaged and others come to it naturally.”

Many parents and students expressed gratitude to Dr. Ramos and the District for putting together the KIVA, as they felt it put everyone on level ground, rather than being told what is happening in a subject in the district by an official. It is anticipated that Dr. Ramos and his staff will take information learned from the session and integrate it into ongoing discussions about improving the South Orange-Maplewood math program, especially as regards reaching all students and making sure no one is left behind, or without sufficient opportunity to succeed.

The district has added math KIVA topics to the Let’s Talk application so people can continue discussing the topic. Visit this link.