Driving down busy Valley Street it’s easy to miss J&J Caribbean, but loyal customers know right where it is. Anchoring the north end of a row of small storefronts near Roland Avenue, this South Orange institution has been going strong for 21 years. Judith Joy Henry, chef, owner and namesake, is the restaurant’s heart and soul.

It all started when Joy decided to stop commuting and leave her finance career in New York, NY. Her three children had grown up and moved on to universities so the time was right. It was a bold move and her husband Vernon Henry, an educator who teaches physics at the HARP Academy in Paterson, NJ, asked what she would do if it didn’t work out. ‘I told him I’d rather clean the floor than go back to the corporate world,’ she said. Luckily, she never had to come up with a Plan B. After so many years, her fans include families that span generations, locals as well as residents of nearby towns. 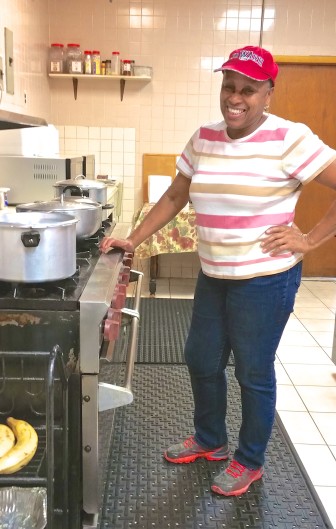 Originally from Jamaica, Joy opened with a pot of her grandmother’s curry chicken and roti. It was her first offering as a lunch special and a dish that still brings people into her establishment. Many Jamaican dishes require a long cooking time so she starts at 7 a.m. every day except Sunday, the one day the restaurant is closed. She blends her own spices and uses fresh herbs, emphasizing the traditional way of cooking. In the morning, pots of oxtails and peas simmer on the huge 10-burner stove while baking patties scent the kitchen with comfort and warmth. She makes 300 pastries a day, the majority filled with spicy beef and headed for the hands of Columbia High School students.

Teens Flock to this Small Spot with a Big Heart

As they have for two decades, groups of teenagers arrive in waves that begin and end with the school’s lunch periods. Some were introduced to J&J by their parents who also lunched there as kids. Others, including a junior named Luc, found the restaurant through friends. It was his first time eating Jamaican food, something he now does every other week or so. He said the food is ‘tasty, cheap and filling’ and described Henry’s handmade patties as ‘awesome.’

Joy warmly greets the students she sees every day and said she keeps an eye on them. ‘I don’t let them sit here during school hours,’ she said, and if they curse or carry on inappropriate conversations, she said she will ‘throw them out.’ On a recent Wednesday, a few boys who came in for lunch said an acquaintance of theirs was no longer welcome. ‘She keeps them in line,’ one sophomore said. After paying for patties stuffed in coco bread, they ate, talked and laughed while they slowly wandered back to campus. 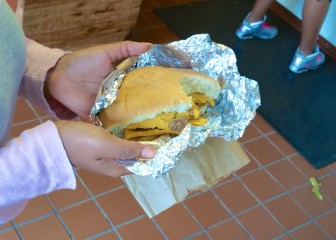 Once the high-school students head home, dinner customers start to come in. Many know Joy by name and swap stories while waiting for their food. Some order the jerk chicken that she first oven-roasts and then grills outside in back of the restaurant, weather permitting. Toward closing time, her husband comes in for his evening meal. He once tutored students at the restaurant, but when he started teaching in Paterson, he no longer had time. Instead, he keeps Joy company. Together they end most nights over a Scrabble board set on one of the restaurant’s small tables.

On Saturdays, Joy’s menu sometimes includes ackee and saltfish, the national dish of Jamaica, but she makes a little less of everything so she can close early. When the food runs out, her week comes to an end. ‘She’s the best,’ said Susan Gordon who works as a nanny in Maplewood and drives over a few times a week to pick up patties or oxtails for lunch. ‘It’s always hot and good.’

Stacy Basko is a writer, recipe developer and cooking instructor. She can be found on Instagram at @sbasko, at www.doorstepdishes.com, or in her car shuttling her kids around Maplewood and South Orange.