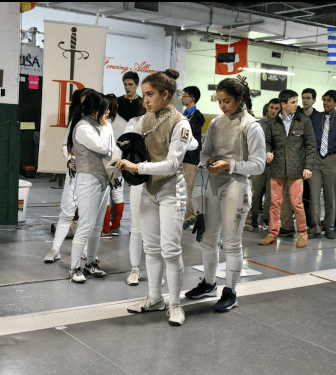 (The following article was submitted by a team parent).

The Bernards High School girls fencing team entered the New Jersey Fencing Alliance on Wednesday, Feb. 18, exuding an air of supreme confidence. They planted a large white banner with the Bernards fencing logo next to the strip and proceeded to warm up in a relaxed manner. No doubt the team was looking to avenge their loss at last year’s state finals at the hands of the Columbia cougars in what was a down-to-the-wire meet.

To a certain extent, Bernards’ attitude was understandable. The previous week, in the Elite 8, 12th-seeded Bernards had upset 4th-seeded Mendham with a shocking 22-5 score. The week before that, in the Sweet 16, they had also stunned 5th-seeded Indian Hills, beating them 21-6.

Ultimately, though, Bernards’ confidence would prove ill-advised, because to display such hubris on the Cougars’ home turf was the equivalent of waving a red flag in front of a bull.

The Columbia saber line was starting things off with what many would see as a disadvantage. Their A-strip, Blessing Olaode, was out of commission, having injured herself during practice only hours before. Senior Celia Accardi, usually B-strip, stepped in to take her place. The saber squad captain notched Columbia’s first victory of the night with a decisive score of 5-2. Natalie Martinez followed suit with a solid 5-3 win. Subbing on Columbia’s C-strip was freshman Maya Schnall. What Bernards may have seen as a chance for an early easy win turned into a reminder of the word always associated with the Columbia team: depth. Schnall stunned her opponent with a 5-0 win to complete the saber sweep.

The foil round presented Bernards a chance to try to right their ship. Their lineup of Caitlin Buteau, Caitlin Kotz, and Kristen Coury is formidable. Yet Buteau’s hyperaggressive style was no match for Samantha Viqueira’s unassuming skill. Their bout ended in a 5-2 win for the Cougars. Sam’s sister Marissa also proved her mettle, in a seesaw competition that she wrapped up with a 5-3 victory. Camille Pham shut the door on any hopes Bernards may have had for a foil win, besting her opponent 5-1 for a foil sweep.

The epee squad’s first two bouts were more of the same, with Nina Kambili and Abby Merelman contributing identical 5-2 wins. In the last bout of the first round, Bernards finally managed to get on the board with a win by Haley Hahn. The Cougars led 8-1.

For Columbia, the lone defeat in epee turned out to be merely a bump in the road, not a turning point, as Bernards may have hoped. The Cougar sabers went on a tear once again, with Martinez (5-3), Schnall (5-0), and Accardi (5-1) scoring three more wins for another saber sweep.

Things got a little dicey for Marissa in the second round of foil, as she watched Buteau chip away her early 4-0 lead until the score stood at 4-3. Marissa finally shut her down, scoring the final touch for the win. With the next bout either keeping Bernards’ hopes alive or putting Columbia one step closer to the state final, the pressure was high on Pham. Bernards’ Kotz scored first; Pham answered with two touches of her own. Kotz scored again to tie things up. Pham again pulled ahead, scoring two touches, only to have Kotz tie things up a second time right before the end of regulation time. With one minute of overtime on the clock and Bernards having priority, the battle raged on until Pham finally scored the winning touch.

Sam Viqueira’s calm demeanor and methodical scoring almost made her 5-2 victory over Koury anti-climatic. Her win helped the Cougars clinch the Final Four meet with a score of 14-1. Columbia’s epee starters finished off the second round with wins by Merelman (5-3) and Brigid Lynch (5-4). Substitutions were made by Columbia in the final round. Wins by Luz Aguba in foil (5-4) and Katie Hilton in epee (5-4) brought the final score to 18-9.

If the Columbia girls’ semifinal victory could be described as “shock and awe,” the boys’ could be considered “calm under pressure and steely resolve.” They faced Watchung Hills at the New Jersey Fencing Alliance last Thursday for the second time this season. Despite the prior 14-13 nail-biting victory, the boys felt that having saber ace Andrew Doddo would give them a crucial edge despite Harrison Woods’ being out because of an illness.

First-round saber saw three tense 5-4 bouts, but only Matt Rothenberg came away with a Columbia win. A quiet tension was in the air as foilists Tran Soles-Torres, Kiichi Sakai, and Jack Goldberg contemplated their opponents. Soles-Torres and Sakai started with stunning 5-1 wins, and Goldberg capped the sweep with a clutch 5-4 victory after trailing 0-3. Bryn Hammarberg then faced Watchung’s A-strip epee ace, Ian Blakeslee. After a back and forth knotted the bout at 3-3, Hammarberg pulled off the 5-3 decision, but this was the only epee first-round win. Columbia led 5-4. 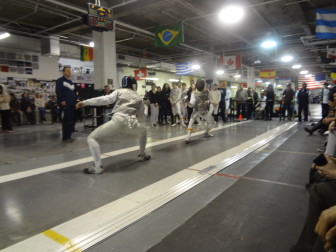 Second-round saber again saw close bouts, but Doddo and Rothenberg both pulled off 5-4 wins. Columbia’s foil fortunes faltered somewhat, as only Soles-Torres could register a commanding 5-0 victory. Hammarberg notched the only second-round epee win, and the score was tied at 9-9 going into the final round.

Doddo and Gordon Rutledge started with 5-2, 5-3 saber victories, respectively. With the finish line in sight, Soles-Torres and Sakai followed with dominating 5-0, 5-2 foil wins, respectively, to give Columbia a 13-11 edge going into the final epee round. Everyone breathed a sigh of relief knowing that Hammarberg was no stranger to clutch clinch victories.

Enter Marcus Jamison against Watchung’s Blakeslee. Pressure is a funny thing. Jamison had none, knowing Bryn was on deck; Blakeslee had tons, knowing he had to win. Back and forth they went, with the score knotted at 4-4 when time expired. Jamison with priority inexplicably pressed Blakeslee back to his end of the strip, then with a sudden lunge and counter, Jamison gets one light to clinch the semifinal win at 14-11.

The Cougars travel to Morris Hills on Wednesday, Feb. 25. The girls will face off with Pingry as they seek to defend their title in the state final. The boys will see a rematch of last year’s final against Ridge, defending their title as well.