The following is from Krysia Woods 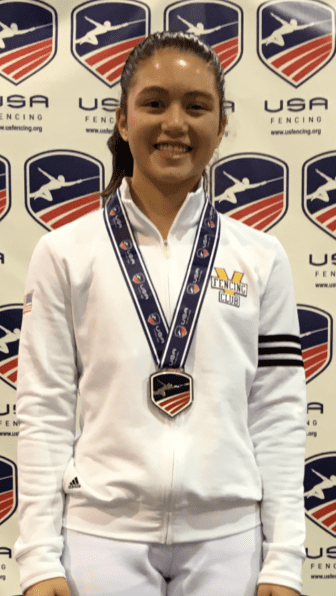 Rhodes, who trains with international foil fencing champion Jack Woods at the V fencing club in Livingston, is following his successful trajectory in competing in these more challenging older age events and taking home the medals. Most recently Rhodes won the Silver medal at the North American Cup in Richmond, Virginia, when she competed in the Div 1-A Women’s A3 foil event with 66 top level foil fencers from around the USA and Canada. She won all of her pool bouts to get top seeding, and then went on to win Silver by defeating Erika Wong from Northern California.

Rhodes, who attends the South Orange Middle School, also won the Gold Medal at the Thrust Fall Regional Junior Cadet Circuit Region 3 Tournament in the Cadet Women’s Foil event. She competed in this A2C3 even with 64 fencers, winning all of her initial pool bouts which seeded her at number 5 before the direct elimination bouts. She then pulled out her repertoire of advanced moves  to take the Gold medal by defeating Haley Koo, also from New Jersey, in the finals (13-9) 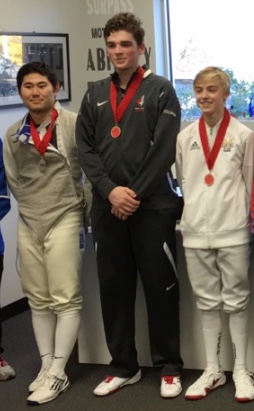 Meanwhile Maplewood’s Jack Woods, who has been dealing with an ankle injury, won the Bronze medal at The Durkan Rooster Division 1A Regional Open Circuit-Region 3 Tournament held at Hackensack, New Jersey. Seventy top level fencers competed in this Div. 1A Senior Men’s foil A4 rated open age event. This is a major event on the fencing circuit calendar. Woods demonstrated his top fencing form and an outstanding skill-share in the initial pool bouts, to be seeded number 1 overall prior to the direct elimination bouts.

Woods was narrowly defeated by Canada’s Mateusz Kozak (15-13) in the semi-final bout to take the Bronze medal, and missed out on meeting CHS and Harvard alum Brian Kaneshige on the final’s strip.  Woods, who is now a freshman at Columbia High School, will be fencing on the foil A strip for the CHS boys’ fencing team.

Said Coach Vashkvich, “Jack continues to amaze us all in these older age events given the huge difference in the strength and height of his opponents. It has been more and more demanding for him physically, and he has been working through a few injuries.”