Maplewood residents participating in the Sustainable Essex Alliance (SEA) may have already received the following letter from PSE&G advising you that, as of September 1, your electrical supplier will revert back to PSE&G: 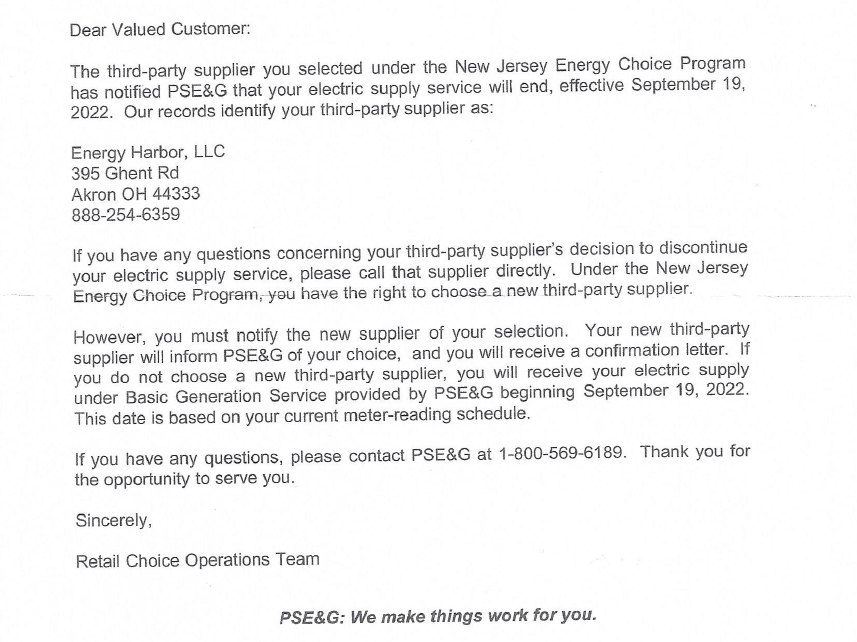 SEA participants previously had electricity supplied through Energy Harbor, an alternative provider of cheaper and greener electrical content, until their 18-month contract expired on August 31, 2022.  The contract provided less expensive electricity supply, and about twice the green content as that provided by PSE&G. This was the SEA’s second successful contract with an alternative electrical supplier.

Hoping for a third consecutive contract, the SEA tested the market in May of 2022 by requesting proposals from third-party suppliers for a new energy supply contract. The prices received were all significantly higher than PSE&G’s utility rates and it was concluded that, for the time being, residents would be better served by PSE&G. The SEA is working continuously with our consultant to monitor the volatile energy market. Once conditions improve, the SEA will issue another request for proposal–please stay tuned! In the meantime, expect to receive solicitations by mail and/or phone for individual energy contracts from other alternative suppliers. These are not affiliated with the Township or the SEA.

The SEA is a seven-municipal-member government energy aggregation, for which Maplewood serves as the Lead Agent. Our municipal partners in this initiative are South Orange, Verona, Livingston, Glen Ridge, Montclair, and Glen Rock.