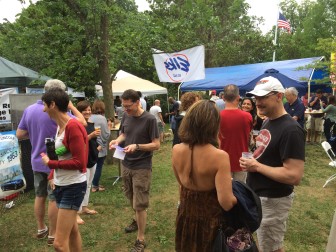 It was only mid-afternoon on Saturday, but already Kate Cahill and Ron Housley knew the Maplewoodstock Beer Garden was going to break records in its fundraising for local food pantries.

This year, the beer garden opened two hours earlier for each of the two days of Maplewoodstock (July 9 and 10), with serving beginning at noon instead of 2 p.m.

Attendees took advantage of the increased number of tents, tables and chairs to bring in their lunches and enjoy a beverage with their meal (food can come into the Beer Garden, but alcohol cannot leave the premises).

This year, in addition to beer, organizers added sangria. The wine selections also improved with the input of Hank Zona of The Grapes Unwrapped.

“Dave Hoffman’s Climax Brewery of Roselle Park is supplying the beers, as they did last year. We arranged for a slightly different line up of brews from last time: an IPA, and ESB, a lighter Ale, and a Hefeweizen,” said Cahill, before the event.

The beer garden was organized by Cahill, Housley and the South Orange Elks Club, with community members signing up to volunteer to staff the garden.

All proceeds from the Beer Garden’s “Tips Jar” are donated to two local food pantries, Our Lady of Sorrows and St. Joseph’s. The South Orange Elks matched the first $250 collected in the tips jars.

We’ll post the total amount raised when the final tally is in.