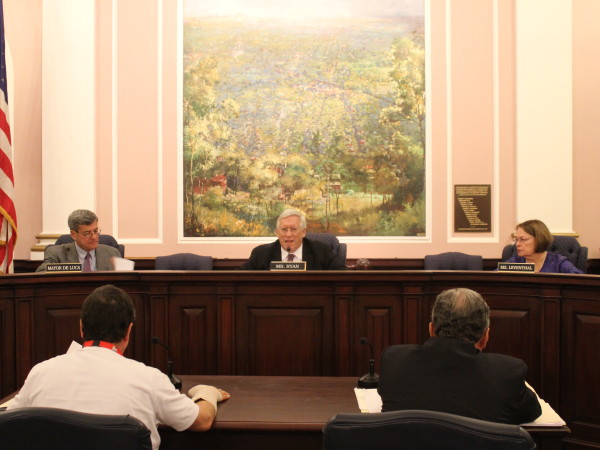 Speaking at her last meeting as Deputy Mayor and as a member of the Township Committee, Kathleen Leventhal urged Maplewood residents to continue to make the town remarkable for its spirit of volunteerism.

“When my [husband] Jerry and I were moving here, there was an article in The New York Times — “If you are thinking of moving to… Maplewood” — that’s one reason we got here. It talked about the volunteerism…. It needs a shot in the arm now. So anybody listening, please consider volunteering.”

Leventhal — a native of Queens, NY, whose full name isKathleen Elizabeth Mary Murphy Vazquez Leventhal — announced early this year that she would not seek another term on the Maplewood Township Committee, instead choosing to retire from the governing body after four terms, or 12 years, of service.

In her parting comments on Tuesday night, Leventhal, who is most noted for her work on matters of health and sustainability in Maplewood, chose not to talk about her legacy; instead, she used her time to thank numerous people and talk about the future of the town.

Before the meeting, Leventhal revealed a bit of sentimentality as she noted that she was wearing the same jacket that she had worn to her swearing-in ceremony 12 years ago.

When she began her remarks, Leventhal first thanked the voters and residents of Maplewood: “Through all these years, I’ve appreciated the trust put in me.”

Her comments highlighted what many in town have come to admire about Leventhal: her dedication and her humility.

“I consider one of my strengths that I always wanted to hear from residents and business owners what they considered was important, and I thank them for sharing, thank you all for sharing, even when it turned out that we didn’t agree with one another, because we always had Maplewood foremost in our minds.” 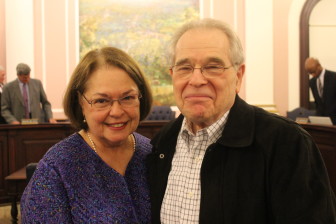 Leventhal said she was also proud that the governing body had become more diverse during her tenure:

“Back before I was sworn in — in 2003 — we had five white men representing you, and I would say, ‘Look at us now,’ and you will see that we are representative of Maplewood’s diversity, and I’m very happy that I was here as a part of that time.”

“I’d like to thank our staff. We change. But our staff are constant and that’s a really good thing. Our staff and our department heads are the backbone of the town. The advisory committees and my liaison groups have been thanking me in recent weeks — I just don’t have a more eloquent way to say it, but I want to thank you. The volunteerism in this town is not to be matched any place.”

Leventhal also thanked her husband Jerry, “my partner in life’s adventure, my counsel,” saying that without his “true heartfelt support [there was] no way I could be of service to this community. It’s a hard job, folks!”

In closing, Leventhal remarked that she “had enjoyed her time serving. It’s been a journey that I’m very happy to have lived through. I’ve grown through it. ”

“Our town has so many possibilities. I ask each of you to imagine what the future could hold for Maplewood and to work for it. I wish you all love and peace in the years ahead.”

Later in the meeting, Leventhal extended her comments and thank-you’s, thanking South Orange leaders for their work on shared services, advising newly elected TC members Nancy Adams and Greg Lembrich to “give it their all,” telling Asst. Admin. Cesar Correa that the town was lucky to have him, and complimenting Roger Desiderio for being “the only attorney [she’d ever met] who was also a regular person.” Warm words followed for Town Clerk Liz Fritzen, Township Administrator Joe Manning, and her colleagues on the Township Committee.

Leventhal told India Larrier how happy she was when Larrier arrived on the TC and there were then two women on the governing body. “It’s not just because you’re a woman, it’s who you are as a woman,” said Leventhal who cited Larrier’s “clear thinking.” Regarding Marlon K. Brownlee, Leventhal said, “In sticking to what you think is right, you’ve had me think deeper on my own views.” Of Jerry Ryan, she revealed that he was her paper boy back on Staten Island, and complimented his ability to quickly “size up an issue” and look at it from different perspectives. She added, “If I had a drink in hand, I would say, ‘May the road continue to rise to meet you.'”

“Vic, politics put us in a relationship that was on again, off again, on again,” Leventhal told Mayor Vic De Luca. “Now it’s a relationship that I’ve come to value a lot. You are a very strong leader. You make Maplewood your priority. And I respect 2000% your honesty and your hard work.”

(Listen to Leventhal’s remarks on the audio file here.)

“In all my years of observing public service, I don’t think I ever saw anyone operate with that level of principle,” said Profeta.

“You have a passion for doing the right thing,” said Profeta. He then saluted Leventhal as he returned to his seat.

De Luca said he had suggested her in 2002 and called her. “You did decide to run .. and you were not successful that year, but you were a great candidate … you listened to folks, you cared about what they had to say. I’ve served with 12 people on the TC and by far you were always the person who was the most ethical and the most principled and as time went on you also became practical… You asked the tough questions… But it was always done to move the process forward. You were never obstructionist. You always thought the best of everyone’s intentions and it’s been a pleasure serving with you.”

De Luca also credited Leventhal for her vision saying that the town’s sustainability focus  was as much hers and former Mayor Profeta’s. He also credited her for her work on domestic violence. In selecting two words about Leventhal, De Luca said he would select: “She cares.”