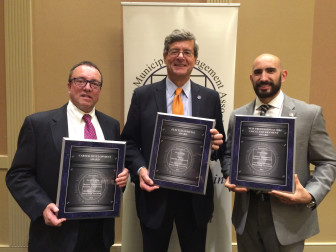 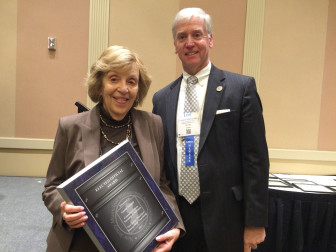 Assistant Maplewood Township Administrator Cesar Correa was recognized with the New Professional to Local Government Award given to an NJMMA member with no more than five years in the profession, who has demonstrated a commitment to excellence in local government service.

Maplewood Township Administrator Joseph Manning received the Career Development Award for his contributions to the development and training of new municipal management professionals.

Manning also was elected to the NJMMA Executive Board.

State and local elected officials, members of the news media and public managers recently were recognized by the New Jersey Municipal Management Association (NJMMA) for their achievements and service during its annual awards luncheon in Atlantic City on November 18.

Madison Borough Administrator Raymond Codey received the Outstanding Manager Award presented to an administrator or manager who has successfully implemented a specific exemplary project or program, or body of work within the last three years. Among his accomplishments, Codey helped lead the community’s efforts to assist the town of Union Beach, after its devastation by Super Storm Sandy in 2012. These included raising nearly $100,000 to send children from Union Beach who were displaced by the storm to summer camp for the past three years; sending code enforcement staff and volunteer groups to help; and coordinating the donation of building materials and a police car.

Codey also created, negotiated and launched a joint court with four neighboring municipalities, resulting in significant savings for all towns, and shepherded a share service arrangement between the borough and the board of education to assist in the sale of property that resulted in financial and other benefits to both.

Daniel Kaminski, a manager with the New Jersey Department of Community Affairs, received the Distinguished Service Award for demonstrating a career-long record of outstanding service to or in local government.

Nancy B. Dinar, editor of the West Essex Tribune, and Gene Robbins, managing editor of the Hillsborough Beacon, received the Press Award, which recognizes members of the news media for their objectivity, consistency and commitment to factual government reporting.

A special award was presented to former Teaneck Township Manager Werner Schmid as one of NJMMA’s longest-serving members. Schmid joined NJMMA in 1955 when he was assistant township manager in Teaneck. He became its manager four years later, serving in that position for the next 30 years. His daughter, West Windsor Township Manager Marlena Schmid, accepted the award in his behalf, and said her father was very honored to be recognized by NJMMA.

Wanaque Borough Administrator Tom Carroll, was recognized for his service as NJMMA president for the past year.

In addition, 18 NJMMA members were recognized on their anniversaries of 5 to 30 years with the organization.

Established more than 50 years ago, NJMMA is dedicated to advancing the professionalism, training, and development of public managers, and facilitating the exchange of ideas and best practices in municipal management. The organization has been instrumental in shaping legislation and policies that affect services to residents and businesses throughout New Jersey.

South Mountain YMCA Duck Race is Back for...