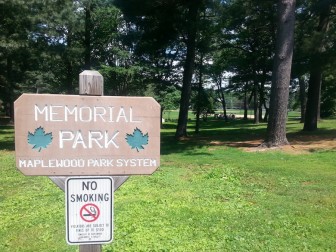 The Maplewood Township Committee heard details Tuesday night on the new Memorial Park Master Plan, which has been a year in the making.

Charles Cunion of RBA Group, the consultants hired (with grant money) to draft the plan, presented it to the committee. Virginia Kurshan, chair of the Maplewood Historic Preservation Commission’s president, praised the plan as “very comprehensive” and said she hoped the committee would adopt it.

There is a “pretty prestigious history to this park,” said Cunion. “This is a fabulous park.”  The study looked at the park’s history and evolution (it was designed in part by the Olmstead Brothers) and current conditions of plantings, trees and infrastructure. The report then provides a large number of recommendations — designated by high-, medium- or low-priority – for how to preserve and enhance the park going forward.

Memorial Park is nearly 100 years old, spans 25 acres, and is a designated historic landmark in Maplewood.

RBA solicited public input through a community forum in the summer of 2013, and also by asking various stakeholders how they spend their time in the park and how they think money should be spent for the park, Cunion said.

Survey participants were more or less evenly divided on how they use the park, with many listing walking, visiting the duck pond, attending outdoor events and concerts, playing tennis and using the playground as frequent activities.

Only 1% said they used the park for “active recreation,” which would include the basketball courts. Cunion expressed surprise that number wasn’t higher. However, as Mayor Vic DeLuca pointed out, it could be that the mostly younger people who use the courts did not attend the public meeting.

Both DeLuca and Township Committeeman Marlon K. Brownlee stressed that the courts were heavily used and those stakeholders should be taken into account when planning where to direct resources. Cunion agreed.

Brownlee said later in an interview that while he found the report comprehensive, “it didn’t appear that that the interests of that particular ‘stakeholder’ group was adequately represented in the resulting list of priorities,” as the only item suggested for the courts was the addition of a heavier fence and that was listed as low priority.

The survey respondents and stakeholders said funds should largely be spent on infrastructure restoration and upkeep, said Cunion, which includes the bridges and other historical structures being maintained.

Some key initiatives for restoring the park, listed as either high or medium priority in the report, include:

Cunion recommended forming a park advocacy group that would serve as an agency to raise funds, work with the town and the HPC, and garner community support for the park.

Brownlee said that while he sees the merits of forming a park advocacy group, he would like to see all Maplewood’s parks considered.

“[While] the sheer number of things to be examined might merit having a group focused solely on Memorial Park…additional groups would probably need to be formed for other parks (e.g., Maplecrest Park, DeHart Park, etc) as well, since they have similar concerns that shouldn’t be overlooked,” said Brownlee in an email. The different groups could work together on prioritizing projects throughout the township’s parks, he said.

DeLuca cautioned against drawing too many conclusions from one public meeting. For instance, he said “A lot of new families who have moved to Maplewood have no experience with the skating rink” (which hasn’t been used for many years because of warmer winters). DeLuca also said he thought more priority should be given to improving areas for children’s sports, such as the ballfields.

The Mayor also noted that parking was an issue of growing concern around the park, as visitors vie with commuters for an ever-shrinking number of spaces.

The next steps were for the plan to go before the Planning Board in September and then to the Township Committee for a final vote.