With less than six weeks to go to the primary election, Maplewood voters eager to find out about the three candidates vying for two Democratic spots on the Maplewood Township Committee fall ballot have some new resources to help them.

On Thursday, Greg Lembrich launched his campaign website at www.greg4maplewood.com.  “I’m really excited about it and proud of how it looks and conveys my message to voters,” Lembrich wrote to the Village Green. 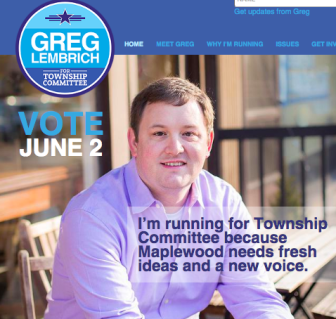 Lembrich’s website explains in depth why he’s running (“I want to make sure that Maplewood remains an outstanding community for the next generation”) and his positions on major issues such as the post office development, tax breaks for developers, government transparency, working with the Board of Education, and “nurturing public spaces and recreational opportunities.”

Committeeman Jerry Ryan and his running mate Planning Board member Nancy Adams are still putting the finishing touches on their campaign website, but it is open and available to the public at adamsryan.com.

Following the tagline “New Ideas, Experience, Leadership,” the Adams/Ryan campaign website provides pulldown menus for each candidate “on the issues.” Adams explains her positions on the following issues: taxes, economic development, expenditure reduction, youth activities, safety, environment, and post office development. In the Meet Nancy Adams portion of the website, Adams writes, “While I’ve had an impact on the Planning Board, particularly with regard to design issues, I would like to have a broader impact in the community I so love by having a seat on the governing body.” 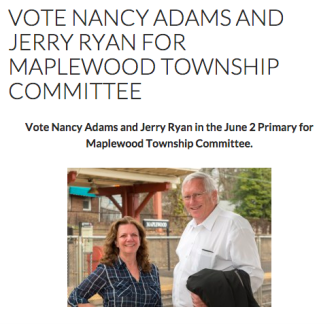 In the issues section, Ryan explains his positions on economic development, responsible spending and taxes, quality of life, and expanded collaborations with other towns. The Meet Jerry Ryan section describes Ryan’s 20 years of elected and volunteer service and his work in preservation, shared services and economic development.

The three candidates will meet at a candidates forum on Thursday, May 21, at the DeHart Community Center on Burnett Avenue. The forum is being hosted by the Hilton Neighborhood Association.

The lone Republican candidate for Maplewood Township Committee, Phyllis Scalera, has not announced a website as yet.

The primary election is on Tuesday, June 2. 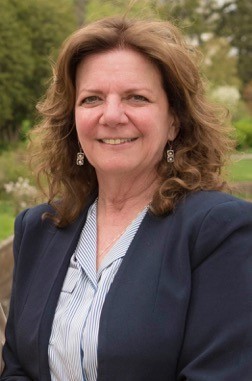