The Maplewood Township Committee will vote Tuesday on final passage of an ordinance that would amend the redevelopment plan for the Post Office site in Maplewood Village. The ordinance was introduced by a unanimous vote on January 7.

The TC will also vote on whether to introduce an ordinance to offer the developer a 5-year tax abatement, better known as a PILOT agreement.

JMF Properties, the project’s developer, has requested changes to the building’s height and setbacks, as well as the addition of an ornamental design element. (The amended plan would also allow the developer to make a payment to the town’s affordable housing trust fund in lieu of building two units of affordable housing, as well as several other changes.)

A link to the proposed amendments can be found here.

As the redevelopment entity, the Township Committee is negotiating directly with JMF and the proposed changes are intended to make the building more “functional and realistic”, said Mayor Vic DeLuca in an email. The changes were previously approved by the Maplewood Village Alliance’s Design Review Committee. 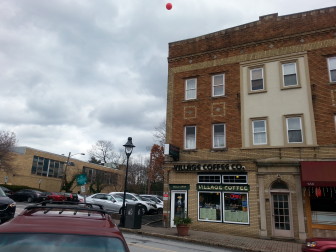 A red balloon attached to the Village Coffee building, which allegedly shows the proposed height (53′) of the new Post Office building.

The height change reflects the actual interior heights minus the mechanicals, venting and insulation. (For more details on the changes, see this article).

The Maplewood Planning Board recently reviewed the amendments and decided not to make a formal recommendation one way or the other, said board chair Tom Carlson in a phone interview. The planning board’s approval is non-binding and not required for the plan to move ahead.

However, Carlson said the height and setbacks were the main points of contention for the planning board and said of JMF’s presented renderings that their “accuracy leaves something to be desired.” He continued, “We all felt we didn’t have enough information to comment one way or another if the increase in height was a good idea. There was no way to visualize [it].”

He wondered why the developer needs the additional 8′ of height. “Why is 53’ that important?”

Dave Helmkamp, a Maplewood resident who attended the planning board meeting, said “with the proposed changes the Township Committee is making concessions on design choices that are far too important to the community.”

“The Planning Board’s primary goal in reviewing redevelopment plans is to determine if what is being proposed is inconsistent with the Township’s master plan,” said DeLuca. “The Board did not find that to be the case…I respect their views and will consider them as we move forward.”

“We always expected that a plan adopted 18 months ago would be changed as the development process went forward,” said DeLuca.

Carlson credited the Mayor for “trying to make [the project] happen at a reasonable speed, not too fast and not too slow.”

Deputy Mayor Kathleen Leventhal said the changes were needed to move the project forward and the end result would benefit the Village and residents. “The Design Committee of the Village Alliance worked long and hard to revise the design with JMF to make it workable…parking is better than the previous developer would have delivered, and the new businesses will bring increased vibrancy.”

Township Committeeman and planning board member Jerry Ryan said the changes were small and would not involve alterations to the building’s materials or the facade. The first (retail) floor would be 15 ‘, the second and third floors 10’6″ high and the fourth floor 12 feet, said DeLuca. Setbacks would then be adjusted to align upper floors with lower floors and would include changing the setback on the Ricalton Sq. side to 21′ from 23′ and setting back the fourth floor 20′ instead of 26’.

JMF has a rendering of the project on its website. Ryan said typically a developer will present detailed site plans later in the process when the development plan is approved.

The Village Green reached out to Township Committee members India Larrier and Marlon K. Brownlee for comment as well.

JMF tapped architect David Minno of Minno Wasko Architects, who designed the Station House, which has been criticized by some residents for its design and materials. Carlson said “maybe [Minno] will be able to produce a better building than the Station House.”

“It will be the tallest building in Maplewood Village,” said Carlson, “but it can be done in a fashion that can be attractive and not detract from the Village.”

DeLuca pointed out that Minno’s design for the PSE&G development on Boyden Avenue “sailed through the Planning Board in less than two hours” and that the Springfield Avenue Partnership’s Design Review Committee worked with Minno and JMF “without any problems.”  JMF later withdrew from the PSE&G project, citing environmental concerns.

“The existing plans for building, in my opinion and the opinion expressed by many architects, urban planners and everyday citizens that live in our town, were already too tall for the village before the changes,” said Kurt Kiley, a member of Engage Maplewood and a former candidate for Township Committee. “Adding an additional 8′ or 18% to the height of the building is a change going in the wrong direction. The building should be shorter, not taller.”

Kiley wanted residents to be provided with renderings from multiple angles — “so they get a feel for what’s coming.” He also said the development is offering no meaningful tax relief to residents; therefore reducing it by one story would have little effect on taxes but “a great impact on preserving our village vibe.”

Regarding the potential PILOT, Kiley said while he is not against them per se, “I have a tough time believing the developer cannot produce a “Financially Viable” project without a PILOT in what is the crown jewel of all properties in Maplewood.”

Previously, DeLuca said the TC had discussed whether giving an incentive to a developer was worth the building being built. While the property is in a prime location, it is relatively small for such a development and a developer is constrained by the Village’s strict zoning laws. Because the site is in an area in need of rehabilitation, a PILOT could by law only be granted for a maximum of five years, he said.

Minno said in a phone interview that he has been negotiating back and forth with the town and the MVA and making adjustments to the project. Once an agreement is reached, he will provide more detailed plans.

“The quality [of materials] is most important,” said Minno; he also noted that the sense of scale was key. As for the building’s style, it takes the notion of traditional architecture and updates it. The current rendering on the JMF website is similar to what the finished building will look like, he said.

The corner adornment “will give some presence on the street as [people] come into town.” The canopy adds a historic element handled in a contemporary way, while the low roof “breaks down” the building. Various design elements will break up the building so “it’s not a box,” said Minno.

He mentioned the Witherspoon House in Princeton, which he designed, as a similar type of mixed-use building in a thriving downtown area. While some residents were initially concerned about the building’s 5-story height, they are now happy with it.

Of the Maplewood site, Minno said, “The combination of materials and the building setbacks will mitigate the height,” and it will be “a good addition to the downtown.” Regarding the building’s height, he noted that the Maplewood Theatre is over 58′ in the back. Also, when the new building is completed with landscaping and street trees, it will look as though it fits into Maplewood’s downtown.