The Township of South Orange Village may have a new water supplier by 2017.

That was the takeaway from a community meeting Monday at SOPAC to discuss the village’s intention to sever its troubled relationship with the East Orange Water Commission (EOWC) and enter into a new contract with the New Jersey American Water (NJAW) company to supply the township’s water. 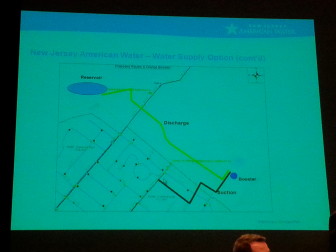 The recommendation, made by a working group consisting of village trustees and officials who have been studying the issue intently in the last couple of years, was one of three possibilities the village has when its contract with EOWC expires in 2016. The group will present its recommendation to the South Orange Board of Trustees later this month.

The water problem in South Orange has been brewing for years. In 2011, the NJ Department of Environmental Protection (DEP) cited the EOWC for exceeding the allowable concentration of one volatile organic compound tetrachloroethylene (PCE), in drinking water it distributed.

The village responded by filing suit against EOWC for water quality and service issues, a suit which is ongoing.

In February 2013, two top EOWC officials were indicted and charged with manipulating water test results; one pled guilty (the other is since deceased). DEP officials later assured local officials and residents the water was safe to drink, and the town has continued to conduct its own independent monitoring.

(Visit the South Orange website for a history of the village’s contractual relationship with the EOWC, the current status of that contract, efforts to research and identify alternative water sources, and details on the recommended course of action.)

At Monday’s meeting, the working group laid out the pros and cons of the three main options: to remain with EOWC, to sell the water system to a private entity, or to enter into contracts with a new water supplier and a separate company to handle and operations and maintenance. 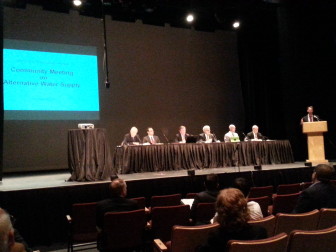 The group believes contracting with NJAW gives the village the best opportunity to have a ready supply of safe drinking water at reasonable rates.

Lewis said the village also explored other water companies, but NJAW is the closest in proximity and has the capacity to supply South Orange with water.

Around a half dozen NJAW representatives presented at the meeting and answered audience questions.

NJAW is the largest publicly held water utility in the country, and supplies water to 14 million people nationwide; 2.5 million — or one in three people — in New Jersey get their water from them.

Thomas Shroba, Sr. Director of North Operations, told the audience that the NJAW’s $7.5 million Canoe Brook water treatment plant built in 2012 (near the Mall at Short Hills) is “state of the art.”

The plant uses green technology including ozone-based technology, carbon filtering, and solar operated agitators — and no chemicals — to clean and regulate the water. The plant was also built on higher ground than its predecessor, which will alleviate flooding issues in the event of a serious storm, Shroba said.

“We take quality seriously,” said Shroba, who said the company has a “great track record” and goes “above and beyond” what is legally required. Water officials test for VOC’s quarterly, and have not detected any in the water, said Shroba.

He also noted that the company invests in its infrastructure and is proactive in maintaining it. For instance, they recently spent $16 million to clean and line the main water line that runs along Sagamore, Mountain and Wyoming in Maplewood — which would be the line to bring water to South Orange.

“We have the capacity in our system to meet the needs of all of South Orange,” said Nicholas DeVecchis, manager of business development. He said NJAW would make a significant capital investment to get the water to South Orange, and would pay to construct a new interconnection in the area of the DPW facility on Walton Avenue.

One audience member asked about the “astronomically high rates” South Orange pays for its water, and wondered how NJAW would keep its rates low. Lewis explained that the state Board of Public Utilities (BPU) regulates the rates the company can charge. The village itself would set the actual rate residents pay, adding a surcharge to cover expenses it incurs in billing and making any capital improvements beyond what NJAW will initially pay.

“We do believe we will be able to deliver water at a lower rate than the EOWC,” said Lewis.

Several residents of the streets that will be most directly affected by the construction of the interconnection — on Walton, Audley, Lenox and Kendal — asked about the impact on their community.

Richard Bell, president of the Farrell Field Park Conservancy, said he was “excited” the village was taking this step but wondered how it would affect residents.

“You will barely see [the construction],” said DeVecchis, who explained that the main work will take place at the foot of the access road to the DPW.

Another resident mentioned Audley Road’s propensity for flooding. Rother said the town’s engineers had looked closely at the street and that the town plans to do a “serious redesign” of the street while construction is taking place.

A Walton Avenue resident asked what the interconnection station would look like; NJAW engineer Dana Wright said it would be an above ground pump station approximately the size of a garage. Wright said the company was very aware of working in a residential neighborhood and would be careful to abate any noise at its facility. Lewis said community members would be fully informed about all decisions and work in advance.

“We will be communicating [with residents] regularly, at Board of Trustee meetings, planning board meetings,” said Lewis. He reiterated that this is a preliminary plan and it still needs to be approved by the BOT and the planning board before the town can proceed.

A video of the meeting and the power point presentation will be added to the village website. If residents have any questions, they can email any of the trustees at info@southorange.org.