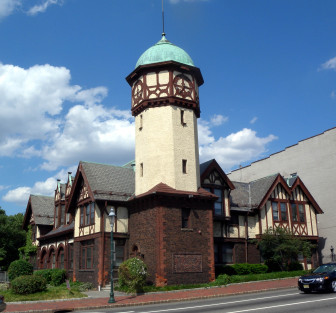 South Orange Village issued a Request for Proposals (RFP) Tuesday seeking buyers for the redevelopment of the historic Village Hall.

The RFP, which can be found on the village website, comes after the Board of Trustees agreed last month to move forward with seeking a buyer for the building, which has been undergoing a renovation process by the town. South Orange has demolished the interior of the building and has removed all asbestos.

Village Hall is listed on the National Register of Historic Places, and the RFP includes a mandatory requirement that the building’s exterior be preserved and restored in compliance with the historic preservation easement that the village itself had agreed to in its renovation of Village Hall.

The exterior is in need of “substantial rehabilitation,” according to the RFP.

In June, Township Administrator Barry Lewis told Trustees the easement would preclude demolition and require the buyer to renovate the building. “It is crafted to insure it remains and is restored,” said Lewis at the meeting.

Village Attorney Steven Rother also assured the trustees that the easement would continue in perpetuity.

The Village had last sought to sell the building in 2011, but received only one offer at the time, which it rejected. However, as the real estate market has significantly improved, the Trustees agreed to put the building back on the market.

The town is seeking buyers who will develop something “in scale and compatible with the Historic Village Hall and surrounding uses” which will “enhance the quality of life” in the central business district and be consistent with the character of the town as a designated Transit Village, according to the RFP.

Interested developers also have the option to seek to purchase the adjacent 72-spot parking lot as part of the sale of Village Hall. The parking lot alone is not being offered as a separate development opportunity.