It’s getting better to be a senior citizen in South Orange, NJ.

At the October 12 meeting of the South Orange Village Board of Trustees, Village President Sheena Collum laid out plans for several new programs to support and retain senior citizens in South Orange.

First, Collum thanked those who attended the township’s 2nd annual senior forum on Sunday, October 11. Collum said that approximately 75 seniors were in attendance at the event at the SOPAC Loft, as well several Village Trustees, town staff and members of the Senior Citizen Advisory Committee. Collum said that, at the forum, staff reported on how the town had “moved the needle” in the past year with respect to senior services. Also at the forum, “We broke out the seniors into workshop groups” on various topics.

Coming out of the forum, Collum said that the committee found that seniors wanted a one-sheet write-up on social and civic groups in town with contact information on how to join.

Collum also reported that seniors said they wanted rideshare opportunities to help them get to meetings when they do join committees and groups. “For seniors who want to be involved with committees, it’s tough to drive at night,” said Collum. She said that the town would be working on identifying a volunteer for each month for each committee to pick up senior members who need rides.

Collum said that seniors also wanted one monthly event each month for seniors, such as movie nights and Scrabble night. 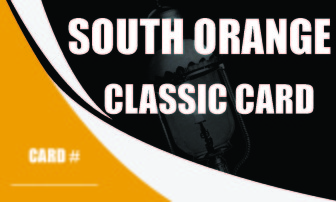 Also at the forum, staff handed out applications for the new South Orange Senior Classic Card through which more than 65 South Orange businesses were offering discounts to senior citizens. Collum thanked resident and volunteer Alyssa Aronson for her work in going door to door and gave a “big shout out” to the Seton Village Committee and the South Orange Village Center Alliance. Collum also thanked the South Orange clerk’s office for overseeing the card process (residents need to show proof of age and proof of residency).

In addition, Collum reported that the South Orange Performing Arts Center will be providing comp tickets to seniors for shows that have not sold out in the week before a performance. Trustee Deborah Davis Ford exclaimed, “That’s wonderful!”

Finally, Collum reported that she and Village Assistant Administrator Adam Loehner had met with Sage Eldercare to craft a service agreement that would cost the town between $15-20,000 per year to provide senior services such as adult day care, meal planning, grocery shopping, medicare counseling, etc. Collum noted that towns such as Millburn and Summit had similar agreements with Sage. “Those town are very please.” Collum also noted, “This is for older seniors with special needs.”

Said Collum, “We want people to be able to retire and stay here.”

In an email to Village Green, Senior Citizens Advisory Committee Chair Scott Egelberg also noted additional improvements that South Orange has been working on over the past year to aid seniors: “The lights in town have been repaired and improved in order to better illuminate the streets at night. We have added extra benches around town. The Parking Authority has worked with us to improve parking for senior events at the library, as well as revise the schedule for the senior citizen jitney, listening to the requests that were sent in.”

Egelberg told the Village Green that the southorange.org website is still being updated but that senior citizens can apply for the discount cards at the clerk’s office. Attached are the application and a brochure describing the card.