The Columbia Cougars took down Livingston for the first time in four years last Friday night at home by a score of 29-24.

The Cougars received the opening kickoff, and after a several penalties were forced to punt. Sophomore Henry Aaron punted the ball back 60 yards to the Lancers, pinning them on their own four-yard line. 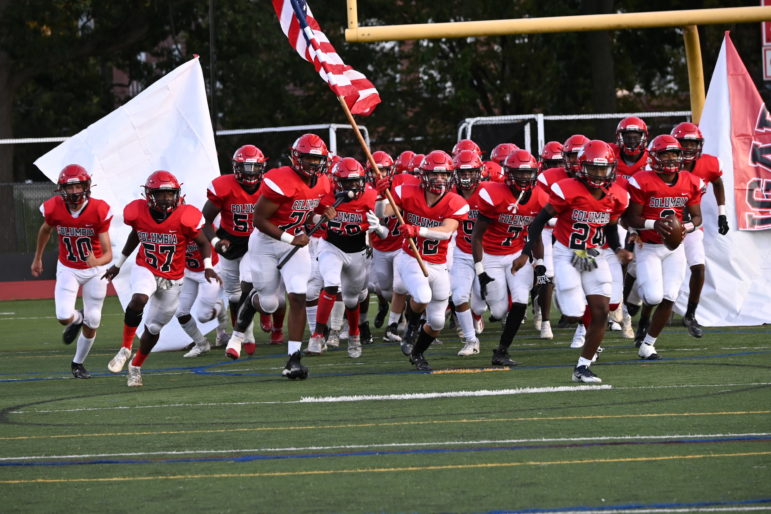 Cougars take the field against Livingston

With early touchdowns coming from sophomore receiver Zhamir Rowan and senior running back Stephen Henry, the Cougars took a 14-0 lead. Facing a staunch Cougar D, the Lancers were forced to punt and hung one high in the air. Columbia was unable to field the punt and turned the ball back over to the Lancers inside their own ten-yard line. After the Lancers punched it in, Columbia defensive end and center Michael Agu broke through the line and blocked the extra point attempt resulting in a 14-6 Cougar lead.

In the early second half, thanks to effective open field blocks from junior receiver Dylan Carthens and sophomore receiver Steve Memo, Rowan caught a screen pass from junior QB Tarik Huff and scampered down the sideline for a 60-yard touchdown.

The Cougars enabled a near-comeback by the Lancers with sloppy special teams play and a raft of penalties. With five minutes left in the game, the Cougars led 27-18. After the Lancers punched in another touchdown, but in need of another big play, they executed an onside kick in hopes of getting the ball back. The Lancers were successful and got the Cougar lead back down to just nine points, with just under 5 minutes. With a short field, the Lancers wasted no time, and punched in another score on making it 27-24. Cougar fans were officially worried.

The Lancers kicked off to the Cougars and,  trying to close out the game,  the Cougars ran down the clock. The Cougars marched to the Lancer ten-yard line, but the Lancers rose to the occasion and forced a Cougar fourth down. The Cougars went for it and failed to pick it up, giving the Lancers the ball back with just over 2 minutes left on their own 10 yard line.  Cougar fans were officially worried, again.

On the second play of the Lancer last-chance drive, their quarterback rolled out.  Stephen Henry met him at the goal line, drove him back, and spun him down for a safety, to give the Cougars an extra two points. The Lancers then tried another onside kick in hopes of having one last shot at the Cougar defense, but the Columbia hands team ushered the kick out of bounds, giving the ball back to Huff and the offense. The Cougars picked up one first down, and then took a knee twice to run out the clock and send the Lancers home.

Henry and Rowan appeared in the Newark Star-Ledger’s State’s Week 2 Top Statistical Performers, with Henry rushing for 227 yards and one touchdown on 21 attempts and Rowan for having 8 catches, 120 yards and two touchdowns.

The Cougars take the field against East Orange on Friday night at 7 pm at Lynn Profeta Field at the Underhill Sports Complex, with a special on-field escort from the local Flag Football league and with the CougarNation student having called a ‘blackout’ for attire in the student stands.