The following is from the Essex County Board of Chosen Freeholders 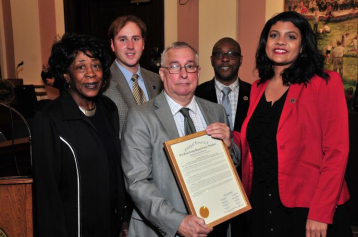 On Wednesday, October 26, 2016 during its meeting at Maplewood Town Hall, The Essex County Board of Chosen Freeholders honored Mr. Robert D. Roe, Maplewood Health Officer, for being named “Essex County Volunteer of the Year.” Mr. Roe received his award from the State of New Jersey Governor’s Council On Alcoholism and Drug Abuse during the agency’s council meeting on Wednesday, September 21, 2016, at the Mercer County College Conference Center in West Windsor, New Jersey.

Robert D. Roe has served as the Maplewood Municipal Alliance Coordinator for over 20 years and is also the Health Officer for the Township of Maplewood where he has served since 1990. He has also worked in the public health profession since 1972.

As Vice-president of the Essex Regional Health Commission and an active member of the of the Essex County Alcohol Drug and Prevention Team (ADAPT), Mr. Roe is a champion for healthy living, and strives to enhance prevention efforts. He achieves this by providing effective programs aimed to reduce the commercial and social availability of alcohol to minors, strengthen family bonding, encourage residents to get involved in community activities and make a substantial investment in delaying the age that youth start to use alcohol.

One of Mr. Roe’s significant accomplishments was the implementation of the Peer Leadership Programs. Under this program, students who become active participants go through an official interview process with local police, alliance members, and school officials. Selected students take an oath to be substance free and are expected to act as role models for their fellow students. These strict guidelines serve as deterrents for students to avoid risky behaviors, enhance their self-confidence, and strengthen relationships between parents, teachers, and peers.

South Mountain YMCA Duck Race is Back for...