The Township of South Orange Village unveiled a new Soofa mobile-charging, solar-powered bench on Sloan Street in the Village Center at 3 p.m. on Thursday, November 3. See more information about the bench in this release from the Township below: 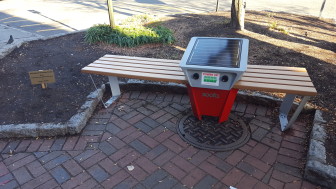 Today, the Township of South Orange Village unveiled its new Soofa bench – an innovative bench that charges mobile devices using solar power while providing the user with a social experience – in the heart of South Orange’s historic downtown.

The benches were generously provided by Sustainable Jersey Small Grant Program funded by Walmart. South Orange Village is the first New Jersey Municipality to install the Soofa bench in to the downtown, and has plans to install several more in the near future.

“South Orange has a long and proud history of being both environmentally conscious and at the forefront of new technologies, said Village President Sheena C. Collum.

“Our goal is to provide this new technology in the heart of our downtown districts that will utilize free solar power to charge the most used digital tools of our on-the-go residents. Busy commuters, Seton Hall college students, local shoppers, senior citizens, and after schoolers will all benefit from this free power source. This program will also help show other municipalities a sustainable public project that is positive for all ages and demographics which can be replicated quite easily.”

The solar-powered bench was featured as an up-and-coming technology at President Barak Obama’s inaugural White House Maker Faire in June 2014 and was referred to as one of the “six wonders of the Maker Faire” in the Wall Street Journal. The first of its kind, the Soofa bench is the brainchild of three female entrepreneurs from the MIT Media Lab and Harvard University who came together with a vision for a sustainable, connected future.

With the installation of the bench, South Orange now joins Soofa Beta Cities network which includes New York City, Boston, Cambridge, Austin, LA and more, making South Orange the first municipality in New Jersey to be a part of the network.

Through the network, South Orange will work with Soofa as an early adopter of leading-edge technology and will advise on new product development to solve problems facing cities and towns, big and small. “At Soofa, our main goal is to make cities better for people through the implementation of technology,” said Soofa CEO Sandra Richter. “To do so, we work closely with our network of partner cities to learn where the biggest opportunities are to innovate together. South Orange Village is a great example of what we look for in a partner – super focused on innovation, sustainability and making its outdoor spaces as inviting as possible for its residents and visitors.”

The Soofa Bench is in 18 U.S. states plus the District of Columbia, as well three other countries. About the Township of South Orange Village: South Orange is Essex County New Jersey’s premier historic urban suburb. With nationally recognized historic districts, a walkable downtown with direct connection to NJ Transit’s Midtown Direct line to New York and Hoboken, plenty of parks and open space and recreational activities and Seton Hall University, the Village prides itself on local shopping, arts, concerts and other activities and an incredibly diverse culture and community.