Dr. A. Zachary Yamba Honored as South Orange Villager of the Month 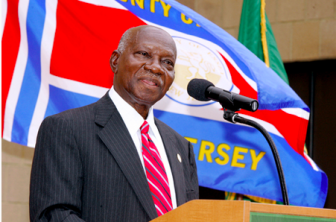 On September 28, the South Orange Village Board of Trustees honored Dr. A. Zachary Yamba, President Emeritus of Essex County College, with a proclamation making him Villager of the Month.

As noted by Michael Minor of the South Orange Community Relations Committee, a month seems too short a time to honor someone with Dr. Yamba’s resume.

Minor noted that Yamba, who moved from northern Ghana to the U.S. in 1961 to attend Seton Hall University, was president of Essex County College for 29 years — a period that saw the college go from a relatively small operation to one of the premier community colleges in the region. Minor said that Yamba’s championing of ECC reflected his “deep interest in helping others.” Yamba, who ascended to the presidency of ECC in 1980 “saw the need for intense remedial education.” He also ensured that ECC remained anchored in Newark when there were efforts to move its central campus to Verona — despite the fact that 80% of students were from Newark and environs, said Minor.

Minor noted Yamba’s many accomplishments at ECC, including obtaining debt service forgiveness and accreditation, and overseeing “massive growth” that saw the school offering 48 majors, hosting students from 51 countries, and opening satellites and sections in high schools and other areas of the County including a campus in West Caldwell.

On the personal level, Minor called Dr. Yamba, “a wonderful friend, a man of great integrity and morals” and “a great family man.”

For his part, Dr. Yamba said he was humbled and honored by the designation.

No, said Trustee Stephen Schnall, “It’s an honor for us to have you as a resident of South Orange.”