What are you grateful for? 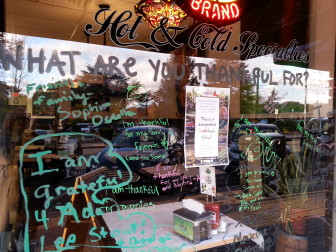 This month, you can show your gratitude for things both big and small through the Gratitude Graffiti Project, an interactive, public effort to encourage people to express what they are thankful for by writing “graffiti” on shop windows.

Launched in 2012 by Maplewood residents Candice Davenport and Lucila McElroy, the project has spread to towns and cities across the globe — from as near as Millburn, NJ to as far as Vancouver, BC and Hong Kong.

Culminating, fittingly, on Thanksgiving Day, participating businesses and locations around town called “Gratitude Stops” are encouraging patrons to write or draw a message on storefronts and doors. Washable window chalk and markers are on hand, provided through the generosity of the Maplewood Health Department.

Over 25 local businesses and the Maplewood Public Library are participating in the project, which is sponsored by The Able Baker with assistance from the Maplewood Chamber of Commerce.

“I really do think it brings the community together,” said Davenport, Maplewood public health nurse. “Maplewoodians have proudly claimed this as ‘a thing we do’ every year as we move toward Thanksgiving and that is all due to the kindness of local businesses to provide the space and the sponsorship, the supportive township and health department, the library system, and the residents of Maplewood- both big and little- who have embraced the intention and the simple fun in having a grateful heart.” 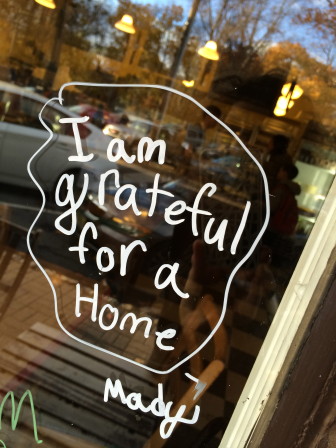 “Through The Gratitude Graffiti Project, the idea of focusing on gratitude was so well received by our patients and staff in 2013 that our Healing Culture Council named 2014 the year of gratitude, and designed a year-long agenda around this topic,” Sharon Johnson-Hakim, manager of Population Health Sciences at Atlantic Health System said in a press release. “The Gratitude Graffiti Project was so easy to implement – a public space and a few markers – and once the writing got started, it was hard for anyone to stop.”

The project is “a tangible way to capture the essence and vibrancy of a community and allow individuals a chance to slow down and practice being grateful for their daily lives and the places where they live, work and play.”

See photos of Gratitude Graffiti at businesses around town in our photo gallery below. Click on any photo to begin.

What are you waiting for? Get graffiti-ing!