As the long-planned merger of the South Orange and Maplewood fire departments enters its final stages, the South Orange Fire Department and fire unions appear to be making a last ditch appeal to halt the process.

Fliers were mailed to residents last week, stating that “Village President Sheena Collum is rushing to dissolve the South Orange Fire Department” and arguing that a proposed merger with Maplewood “falsely promises unrealistic cost savings” while “impairing our ability to respond to multiple, simultaneous incidents.” 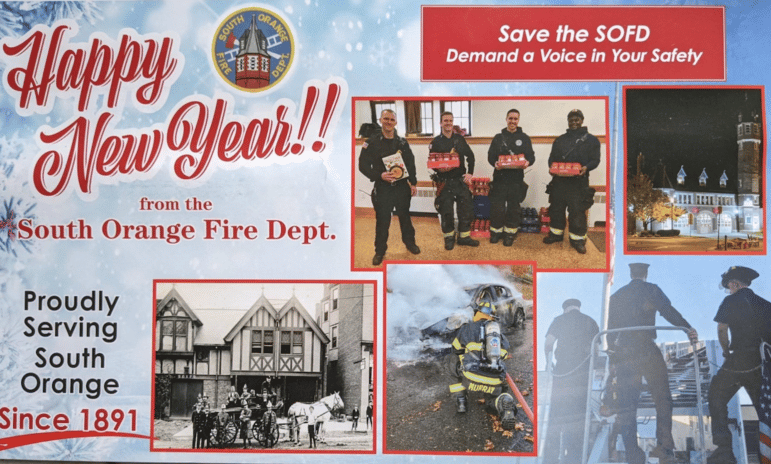 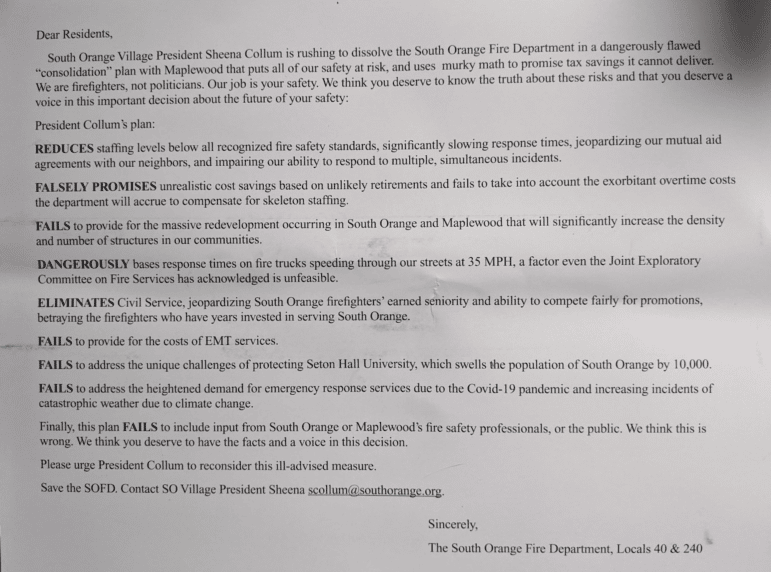 The merger of the South Orange and Maplewood fire departments was the central issue of the Village President election in spring 2019, with members of the statewide New Jersey FMBA campaigning door to door in South Orange to unseat Collum and some fellow local elected leaders contending that the fire unions’ campaign was one of misinformation. Collum ultimately won re-election by a more than 3-to-1 margin over challenger and former South Orange Trustee Deborah Davis Ford.

The current merger process dates back to 2016 and involves elected officials across South Orange and Maplewood, as well as state agencies such as the Department of Community Affairs and the New Jersey Shared Services Czars Nicolas Platt and Jordan Glatt.

“We want to be clear that we have the utmost respect for the men and women of the fire service in South Orange and Maplewood and throughout New Jersey,” said the shared services czars. “This is one of the first assignments we worked on after our appointment. This also received the full attention of the Department of Community Affairs (DCA) who invested countless hours researching and providing data to the two elected bodies. We also had countless meetings over the last three years with all the interested parties. We are disappointed that the fire union has chosen to use scare tactics to attack a merger of departments that will bring more resources, more efficiencies to fighting fires and better ways to manage their staffing needs. Let us emphasis again that the FMBA participated in all our discussions and they came to the table offering no viable alternative to what the DCA has recommended. Their position is not based on any data and nothing else that would support their claim. This is a time for the FMBA to be pulling on the same oar with the taxpayer who pays for their services,” the two shared services czars said.

Asked to comment on the flier, Collum told Village Green: “To date, I’ve received seven responses to the mailer and have shared the landing page with more information on the village’s website (https://www.southorange.org/CivicAlerts.aspx?AID=2167) which contains reports, recommendations, status updates, the PDF from the community presentation in July of 2021 as well as the video coverage of the forum. As always, I welcome community dialogue on any topic and am certainly grateful to the residents who took the time to reach out and ask questions. If I received that flyer in the mail, I’d honestly be concerned as well.”

Collum added, “Given the importance of public safety in our two towns and that this mail piece was directed at me, I do plan to go point by point and address each statement during my Village President’s report at the Board of Trustees meeting on Monday, January 24 at 7 p.m.”

In a phone conversation, Collum told Village Green that the two biggest concerns or “misconceptions” residents had from the fliers where that firehouses would be closed and firefighters would be laid off. That is not the case, said Collum, pointing to a plan showing that only higher level positions would be reduced through attrition with the two towns going from two fire chiefs to one fire chief and nine deputy chiefs to five. No firehouses would be closed. She also said the plan took new development into consideration and would not negatively impact mutual aid agreements with nearby fire departments.

Per the documentation cited by Collum, the reduction in higher level positions does take the joint department staffing from 76 to 71: “Makes no reductions in firefighting line personnel and achieves taxpayer savings through the reduction of redundant management and supervision specifically one (1) Fire Chief and four (4) Deputy Chiefs bringing the current total of a combined department from 76 to 71 through attrition.” Maplewood FMBA Local 25 voiced objection to the number of 70 total firefighters in 2019. 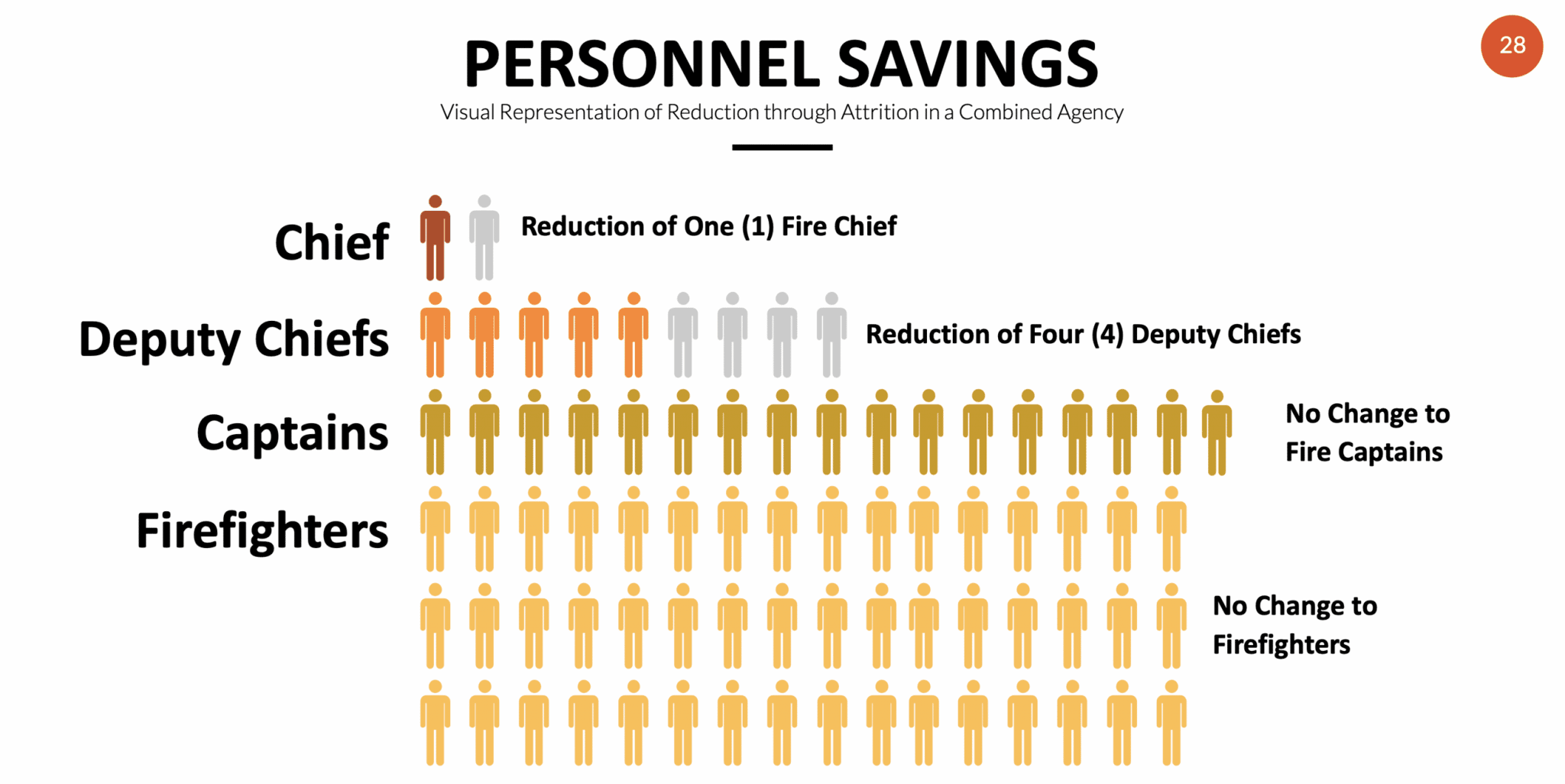 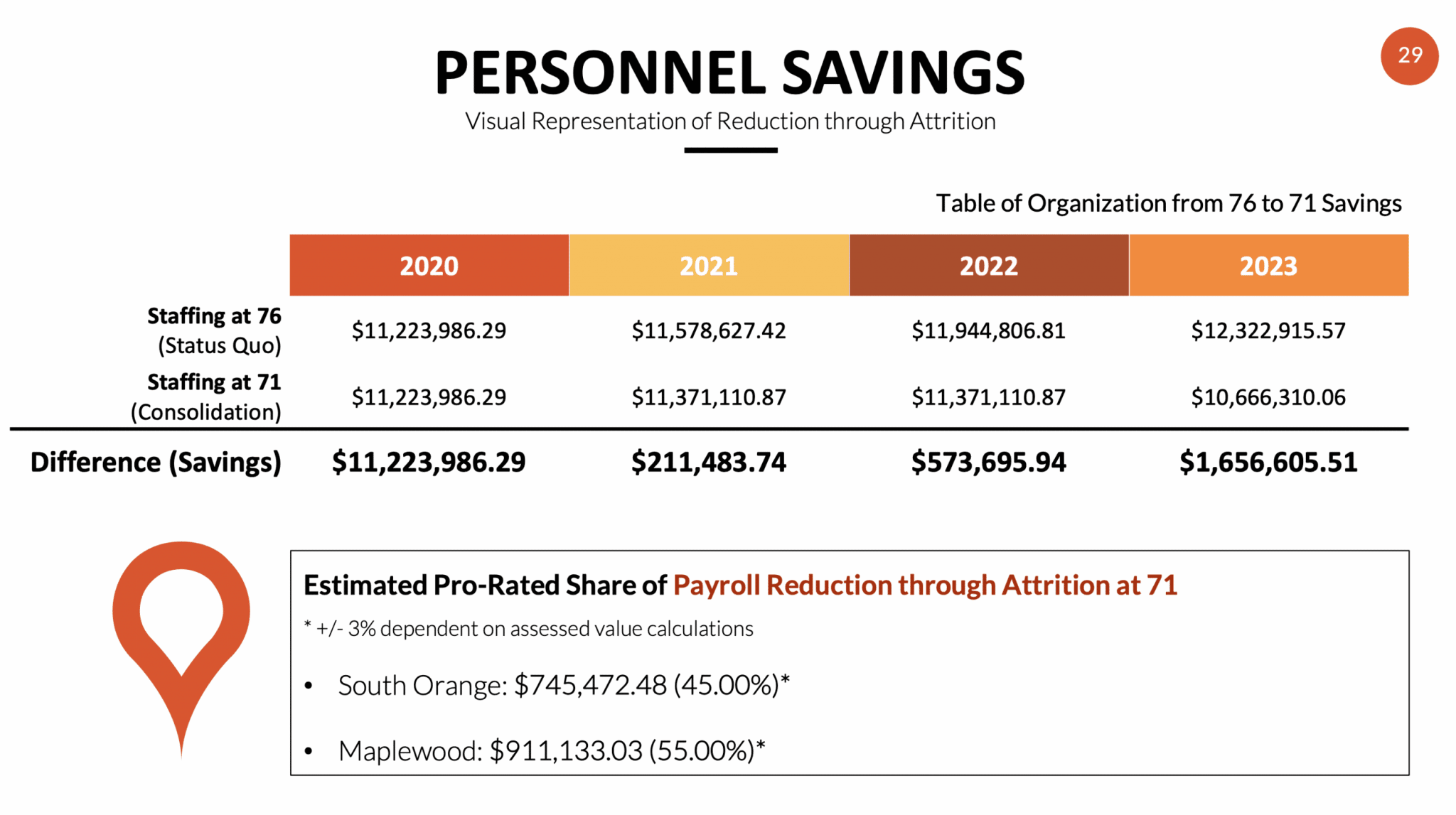 The SOFD flier correctly notes that the new joint fire department will not be civil service (Maplewood is not a civil service town but officials had previously expressed an openness to civil service for the joint department). Officials have said they are working to assure continuity of earned seniority as the two departments are merged.

Greg Lembrich, a former Maplewood Township Committee member and a newly appointed member of the regional service agency (RSA) that will govern the new joint South Mountain Regional Fire Department, responded to the flier in a strongly worded statement.

“This latest mailer continues the State and South Orange FMBA’s baseless and conscienceless campaign of fear mongering and misinformation with respect to the Maplewood/South Orange fire consolidation,” wrote Lembrich.

Lembrich said that, contrary to what is stated in the flier, “This consolidation will objectively produce substantial cost savings for both towns without reducing staffing levels. Response times will not increase, no firehouses will close, and there will be absolutely no compromises with respect to public safety.”

Lembrich added, “While we have the greatest respect for our firefighters, and indeed all of our first responders in SOMA, the FMBA doesn’t have much credibility here.” He asked that State FMBA President Eddie Donnelly and local South Orange FMBA leaders Michael Commins and Jim Jennings “sit at the table and work with us rather than trying to frighten residents with false claims under the guise of a holiday card.”

Finally Lembrich questioned why the flier only named Collum: “Lastly, it does not go unnoticed that despite unanimous support from every elected official in both Maplewood and South Orange of every action to date advancing the merger, the FMBA continues to target its vitriol only against South Orange’s first female Village President. We should absolutely consider the gender dynamics that are playing out here.”

Maplewood’s new Mayor Dean Dafis voiced strong support for the joint fire department at his swearing-in on January 1, citing the necessity of “regional partnerships” to solve regional problems: “We must reduce our tax burden by sharing more services with our sister towns, home rule is NOT sustainable, and it certainly ain’t cheap! – I’m looking forward to our seeing through the merger of our fire department with South Orange’s this year which will significantly reduce the tax burden while improving public safety for  both towns – building enhanced community support systems in mutual aid and vulnerable population support, and truly honoring our stigma-free and diversity brand by incorporating the emerging heritages into our programs, services, and outreach.”

Collum said that she would also continue to press forward: “Despite the disappointing and exhausting tactics being employed by the firefighters union, I continue to value and deeply respect the work they do for our community and I hope all residents will join me in that sentiment.”

Village Green emailed SOFD Chief Sullivan and Deputy Chief Commins for comment but did not receive a direct response. After reaching out to the BGill Group (which had previously sent a press release on behalf of the SOFD) asking if they could verify the source of the flier, a spokesperson responded on behalf of FMBA locals 40 & 240: “The flyer clearly indicates it was sent from and by the SOFD, locals 40 & 240, and clearly states the concerns of the South Orange Fire Department in terms of the seriously flawed plan upon which consolidation is proceeding.”