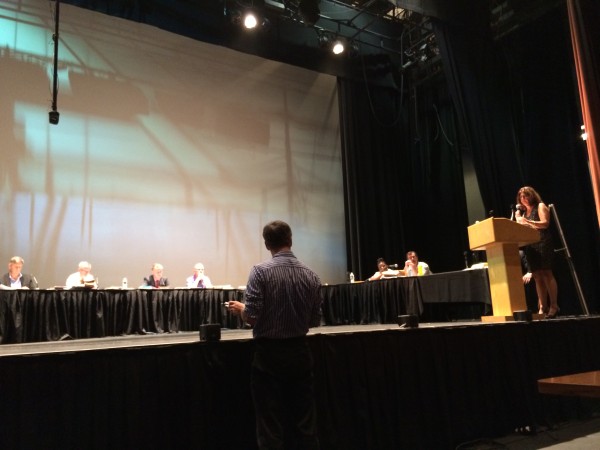 A resident questions traffic engineer Elizabeth Dolan at the Sept. 2, 2014 Zoning Board of Adjustment meeting.

The future of the Marylawn Academy site in South Orange remains a question mark as the South Orange Zoning Board of Adjustment will continue to consider variances requested by Seton Hall University at an as-yet-undetermined future date.

The university is seeking variances that would allow it to buy and convert the Marylawn of the Oranges Academy and the Graves House at Scotland Road and Montrose Avenue into academic and administrative buildings and construct a 202-space parking lot. The former school building would house the university’s graduate medical program.

On Tuesday night, September 2, the Board heard testimony from two more experts on behalf of Seton Hall University. The Zoning Board has heard testimony related to the proposed variances during three other meetings — in May, June and July.

Next, Seton Hall will take its petition to the Historic Preservation Commission at “some indefinite time in the future when Seton Hall resumes the application,” according to Seton Hall attorney Kevin Coakley.

“After we’ve been before the HPC,” said Coakley, “we will communicate in writing to the [Zoning] Board whatever changes there are in the application and then the Board can give us a date.”

ZBA Chair Donald Reeves requested that, at future hearings, Seton Hall provide information on where shuttle buses transporting students from the main campus will queue as well as a breakdown in the travel time of the proposed shuttles.

More than 50 local residents attended the Sept. 2 meeting. Many tried to log their concerns and objections to the project during questioning of the expert witnesses, only to be directed by board members to focus their questions on the experts’ testimony. Public comments on the subject will be heard only after all expert testimony has been completed.

Two experts testified on Sept. 2: Traffic engineer Elizabeth Dolan of Dolan & Dean Consulting Engineers, who continued her testimony from a previous meeting, and shuttle transportation consultant Mitchell Skyer of Solstice Transportation Group, the designer of the shuttle service that would run between the Seton Hall main campus and the Marylawn site.

Dolan reported on and answered questions related to traffic studies that were performed last December and this May at Scotland Road and Montrose Avenue during peak morning and evening traffic hours. She said that she anticipated that the new SHU activity at the site would increase peak hour traffic by 8% and off-peak activity by 6-7%. Dolan said that the roads could support the increases. She also noted that the numbers represented increases over zero activity at the site which is currently vacant, and does not represent an increase over traffic when the site was active as Marylawn Academy.

Dolan said that the traffic projections were “conservative” as they were modeled on 85% of students with parking permits arriving at peak hours. Former Village Trustee Janine Bauer questioned that number saying that the study did not account for the fact that many non-permitted students will arrive some other way than by jitney.

The total student population of the medical school is 560. SHU representatives project that there will be a maximum of 365 students at the site at any one time, with 264 taking shuttles from the main campus. About 100 students will have parking permits as will 91 faculty and staff members.

Both community members and board members expressed skepticism that students would opt to drive to the main campus, park and wait for shuttles to the Marylawn site. Many residents expressed concerns during questioning about potential abuse of on-street parking. Dolan noted that designating and enforcing on-street parking rules was up to the Township.

Skyer faced sharp questioning and criticism from board members who felt that the travel time allotted for the shuttles (11-15 minutes from main campus to the train station to Marylawn) was too short. Mr. Parlopiano said, “The route requires going through 10 traffic lights.” Skyer admitted during questioning that he had never driven the route and that Tuesday marked his first visit to South Orange.

Oakley also talked about the cost of restoring the Graves House as office space, indicating that SHU is no longer interested in restoring the building. “The reports are indicative of an extremely high cost,” said Oakley, “many times what the value of that site might be.”

“So with that information in hand, we provided that advice to the board that we thought that the cost of rehabilitating the Graves House was beyond the utility of the Graves House and said that we needed to rethink our position about restoring it in that fashion and suggested to the board that what would be appropriate would be a remand to the HPC for reconsideration of its advisory opinion with respect to that issue.”

Meanwhile, the Board of Directors of the West Montrose Neighborhood Association has been working to organize residents to oppose the plans.

In an email to association members last Monday, the WMNA Directors stated, “Seton Hall‘s plan turns this former modest school into a highly intensive University use which forever and fundamentally changes the character of our neighborhood. ”

Watch the video of the September 2 meeting here.