A crowd that included local elected leaders gathered in South Orange’s Spiotta Park on January 6, 2022, to mark one year since the insurrection at the Capitol in Washington, D.C.

“It was my honor to join Working Families and the 30 affiliated organizations this evening in South Orange to Stand Up For Democracy in remembrance of the January 6th insurrection of the Capitol,'” wrote New Jersey Assemblywoman Mila Jasey (D-27) on Facebook. 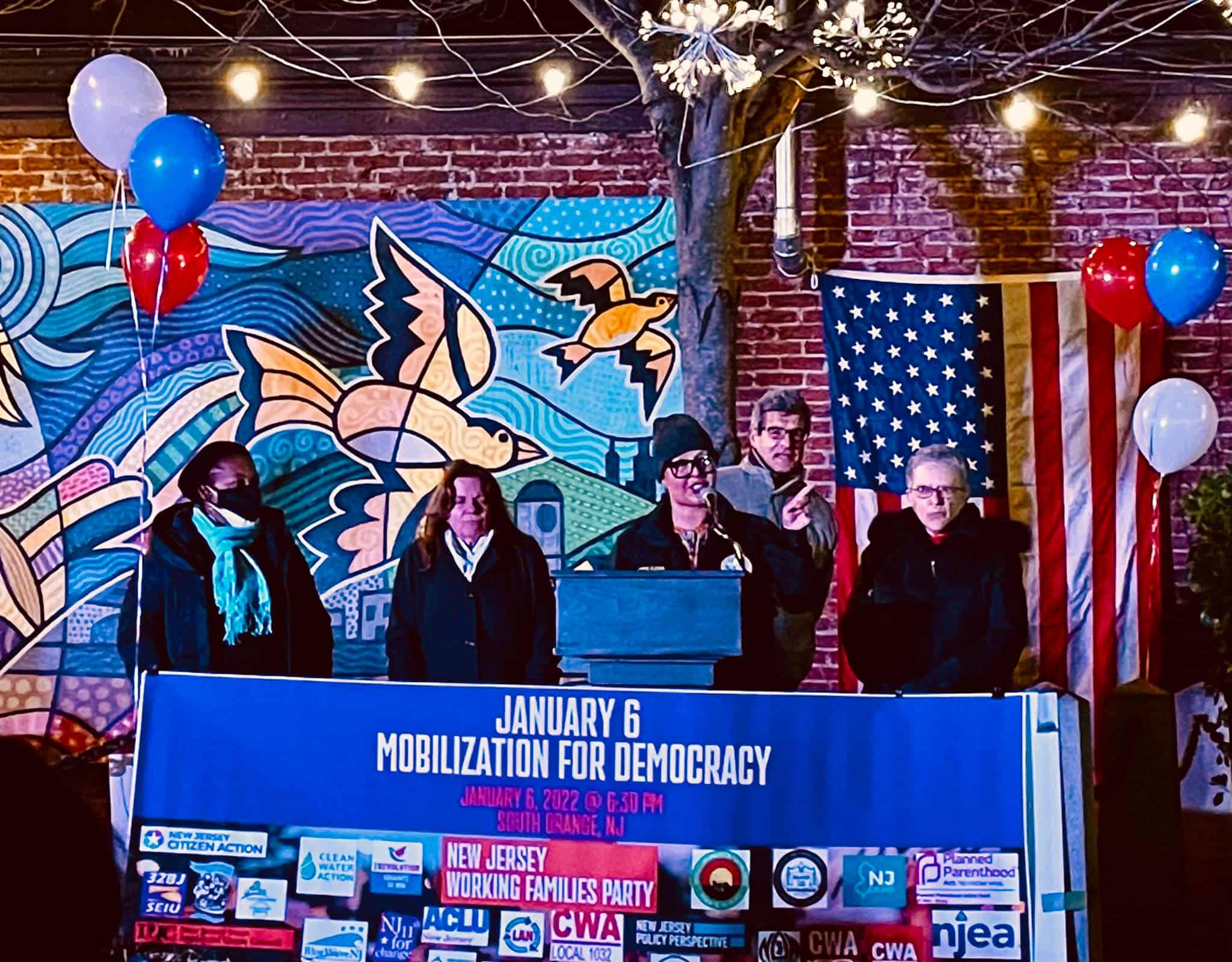 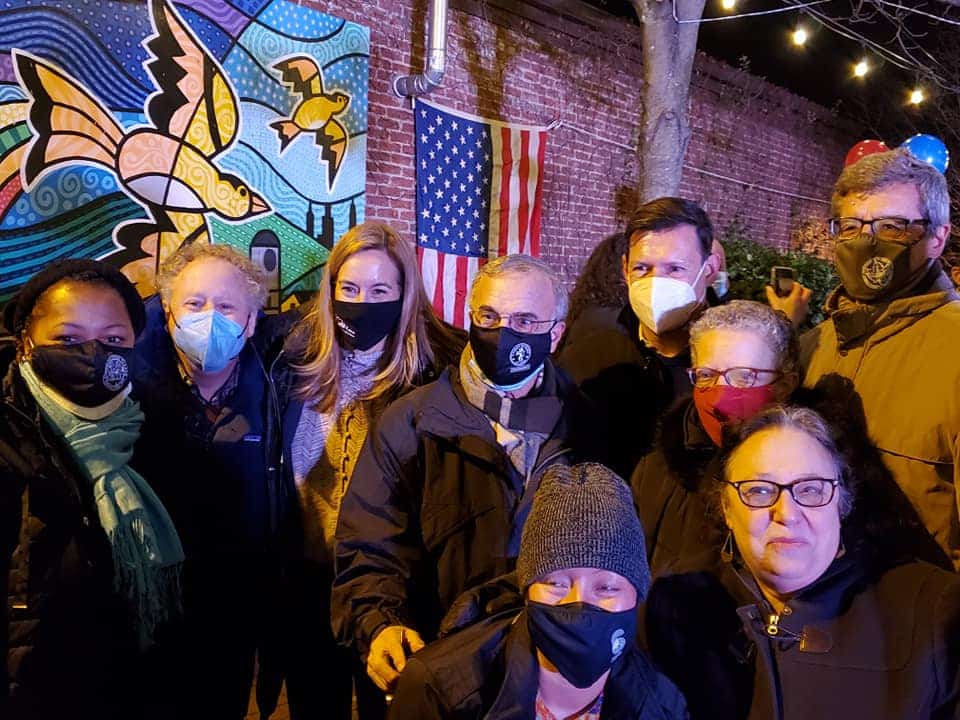 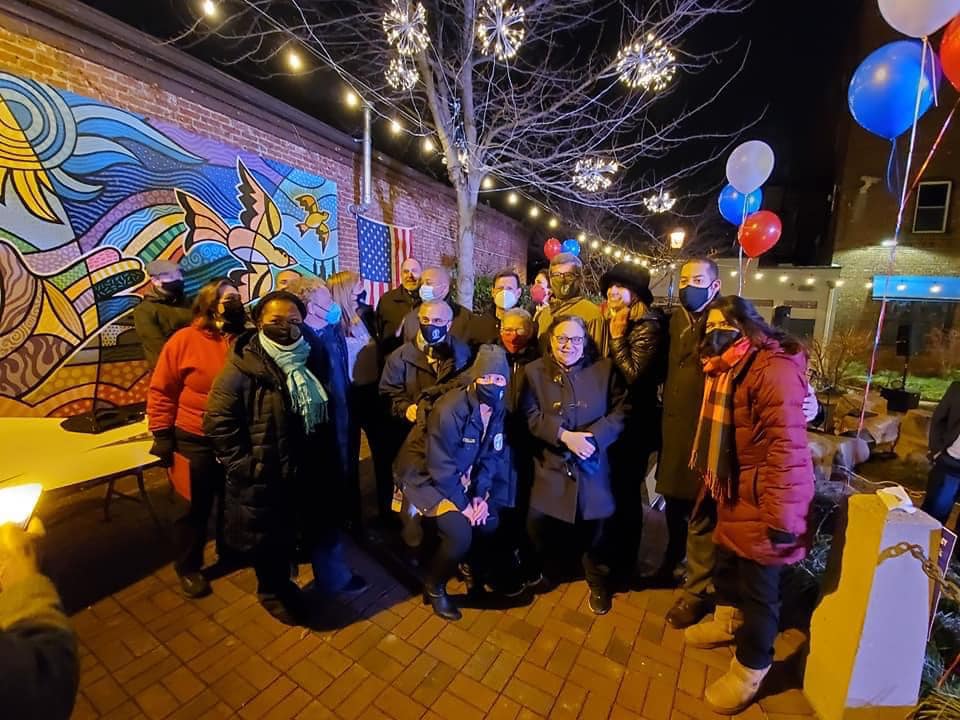 Photos via Facebook (posted by Sheena Collum and Mila Jasey). 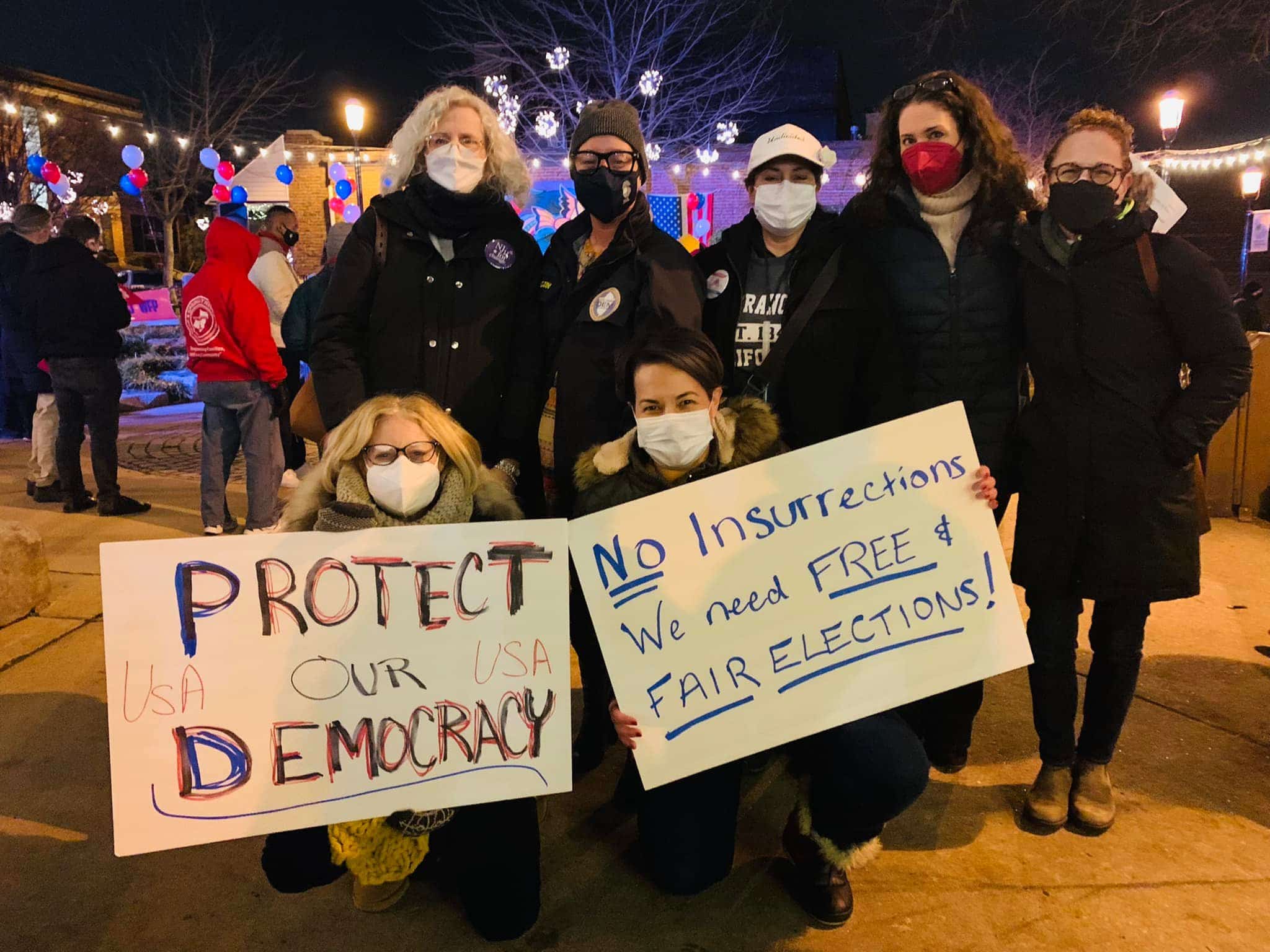 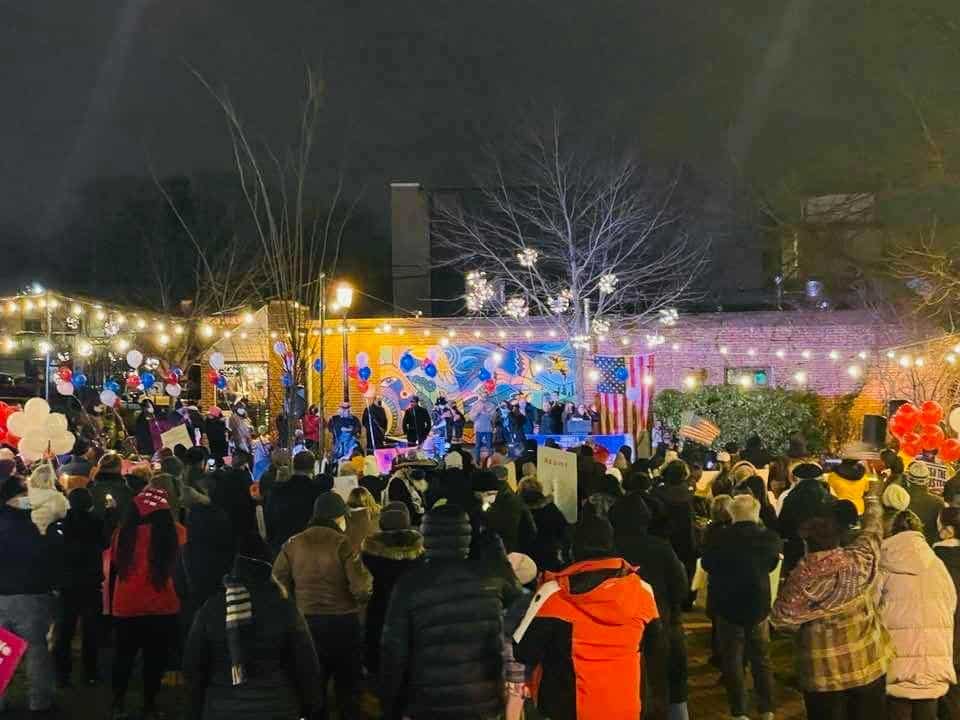 In a press release sent on behalf of the organizing groups, including New Jersey Working Families, numerous officials were quoted:

“A year after an attempted insurrection to overthrow our government, our democracy is under threat like never before,” said Sue Altman, New Jersey Working Families State Director. “In the face of growing threats, from voter suppression to partisan gerrymandering, we need real leadership from Washington and a commitment to strengthen our democratic institutions. Congress must pass meaningful voting rights protections that ensure that working families, and not the politically connected, control the future of our nation.”

New Jersey Working Families was one of nearly 35 organizations that sponsored the rally.

“Our democracy and right to vote is under assault nationwide,” said U.S. Rep. Donald M. Payne, Jr.  “Too many states have used lies and false allegations to limit the voting power of Americans, particular African Americans and other minorities.  Voting rights is one of the top priorities in Congress right now.  I helped pass the John R. Lewis Voting Rights Advancement Act and the For The People Act to strengthen our democracy, protect the right to vote for every American, and eliminate partisan manipulation of Congressional districts to decrease minority representation. We need to restore faith and trust in our democracy.  The right to vote must be protected because it is the most sacred and fundamental right we enjoy as Americans.”

“Jan. 6 was not just an attack on our Capitol, but an attack on the heart of our democracy, our electoral process,” said U.S. Rep. Mikie Sherrill. “It was an attack on all of us as Americans. It’s essential that regardless of party, we come together to safeguard our freedoms and our values for our children and future generations. We must assure they have the same opportunities to assemble, to practice the religion of their choice, and ensure that they enjoy the freedom of speech. We must also safeguard the important guarantee that protects those freedoms: the right to vote.”

“The end of Donald Trump’s administration has not meant the end of Trumpism, and threats to our democratic institutions continue to grow,” said Fran Ehret, Communications Workers of America New Jersey State Director. “We must fight back in the face of efforts to weaken our elections and disenfranchise voters and demand action from Congress to protect our most essential rights.”

“One year ago today, we all watched in horror as our nation’s capital was breached for the first time in over two centuries,” said Sean Spiller, President of the New Jersey Education Association. “That insurrection was nothing less than an attack on our core democratic values.  But that attack did not begin or end on January 6, 2021.  In fact, it is still going strong.”

“A year after our democracy was attacked by a violent mob, the storm clouds of creeping authoritarianism are still threatening,” said Kevin Brown, SEIU Local 32BJ New Jersey State Director. “Our elected officials, especially at the federal level, must act quickly and decisively to protect our democracy and safeguard our fundamental right to vote in the face of this growing menace.”

“Fighting for our democracy must transcend the traditional political divides of Democrats and Republicans,” said former Republican Assemblywoman Maria Rodriguez-Gregg. “Though we disagree on policy, we are united in our love for our country and our commitment to protecting our values and institutions. The ongoing attack on our democracy is unprecedented in our nation’s history, and we must all unite to confront this existential threat.”

“Make no mistake: extremist anti-democratic, white supremacist forces are at play here in ‘blue’ New Jersey,” said Arati Kreibich, former Glen Rock Councilmember. “At least 26 people from New Jersey have been identified and charged for the Capitol insurrection. One member of New Jersey’s Congressional delegation refused to certify the free and fair Presidential election. A year later, there have been few consequences. Without real accountability, AND sustained action to strengthen our rights, we the people are granting permission for the same factions to dismantle our democracy –and this time, succeed.”

“Voting rights are reproductive rights. As long as people are denied access to the ballot, neither democracy, justice, nor reproductive freedom can be achieved, particularly for people of color for whom access to sexual and reproductive health care is increasingly being pushed out of reach,” said Roslyn Rogers Collins of Planned Parenthood Action Fund of New Jersey. “The attacks on our democracy present a grave threat to our health, our rights, and our nation. We must act now — our democracy depends on it.”

“The attack on the U.S. Capitol one year ago by a mob of Trump supporters was a disgrace and an affront to all of us as American citizens.  Even during our worst times, we’ve always had a peaceful transfer of power. The right to vote and choose our elected leaders in free and fair elections is the most sacred and fundamental right a citizen of any country can have,” said Ed Potosnak, Executive Director, New Jersey LCV. “We implore the Biden administration and Congress to pass pending voting rights legislation to ensure no citizen faces barriers to voting because of their race, gender, age, or where they live. We also ask the New Jersey Legislature to expand voter access by approving same day voter registration. Strengthening our democracy, by expanding access to voting, is an urgent issue and must be addressed now to move our great nation and state forward.”

“If the events of Jan. 6 had happened in another country, we in America would call it an attempted coup,” said Deborah Smith Gregory, President of the Newark Branch of the NAACP. “It was a watershed moment for the world to see, just as the hoses and dogs used on Black Americans in the 60’s.  Witnessing overt racism on television galvanized people of all ages and races to unite to change a racist system.  On January 6, 2021, we witnessed an attempted coup in America. We must unite and galvanize people of all races and ages to defend our democracy (imperfect as it may be) against fascism.”

“We need to cement Jan. 6 in our collective consciousness and continue to call for accountability of the insurrectionists, or at some point democracy WILL be lost to those who propagate lies for their own political gain — whether it be lost to a tyrant or dictator or fascist or a religious cult leader, democracy will be lost,” said Cathy Brienza of Ridgewood JOLT. “At this moment Individuals who continue to believe the Great Lie are being installed by state governments in electoral positions with the stated intention of deciding whether or not to accept election results. This along with Voter suppression laws and the perpetuation of the great lie are being used to establish minority rule. When that happens Democracy is lost.”

“The right to choose our own leaders with free and fair elections is one of our most important and fundamental rights,’ said Dena Mottola Jaborska, Executive Director of New Jersey Citizen Action. “That right is under threat, from both violent insurrection and continued attacks on our voting rights. We need all Americans, regardless of party affiliation, race and background to stand together to defend our democracy, and call on our elected leaders to pass legislation protecting our country against anti-democratic forces.”

“Our system of democracy is under attack,” said Leslie Bockol and Mara Novak, Co-Executive Directors of NJ 11th for Change. “On January 6, 2021, it was under physical attack, as violent insurrectionists (emboldened by Donald Trump, and aided by allies within our government) rampaged through the Capitol. In the months that followed, democracy was under attack in statehouses across the nation, through gerrymandering, voter suppression, and legislation intended to disenfranchise millions of voters. If our nation is to survive as a democracy, the people of America cannot stay silent. NJ 11th for Change urges our fellow New Jerseyans to write, phone, and publicly call upon our legislators to fight for democracy, using every legal tool at their disposal. It is well past time to pass federal voting-rights legislation, and to bring those responsible for the Jan. 6 insurrection to justice.”

“So many families are finding it hard to make ends meet,” said Helen Archontou, CEO of the YWCA of Northern New Jersey. “That’s why federal policies are needed to provide a foundation of economic security to help families create a stable environment. We all need to work together to ensure that our political system prioritizes the needs and wellbeing of working families.”

“A year ago, the most powerful person in the world attempted to stop the peaceful transfer of power in our country,” said labor leader Hetty Rosenstein. “Those of us who believe in the promise of America must live and breathe this struggle if we are to save our country. If you are a patriot, you must fight for democracy today and every day.”

“This rally shows those who wish to cheat, lie, and disregard the will of the people that we aren’t going to stand idly by,” said Matt Dragon, Co-Chair Our Revolution Essex, Member Our Revolution New Jersey. “When we defend folks’ right to vote, and ensure that their votes will be counted, we stand on the shoulders of giants – Sojourner Truth, John Lewis, and those murdered in the Freedom Summer. We cannot let them down, we cannot go backward. We hope this rally motivates people to be more vocal, to engage the voters in their everyday lives, and to commit to getting out there in every election. We need your help, whether it be knocking doors, making calls, texting, and supporting rallies for voting rights, racial justice, women’s rights, and civil rights. It’s these causes that unite us as a majority of the country. Let’s empower our communities and continue to move our country forward.”

“One year after the Capitol insurrection, our democracy continues to be under threat,” said Sarah Fajardo, American Civil Liberties Union of New Jersey Policy Director. “Across the country, unconstitutional redistricting plans dilute the democratic process, discriminatory election practices intend to diminish the power of Black and brown voters, and the people of Washington, D.C. still don’t have a voice in our democracy. In New Jersey, there’s much work to be done to build transparent, accountable, and fair governmental processes and establish voting practices that ensure access no matter one’s zip code. We must ensure that our government is truly by the people and for the people.”

LETTER: Deborah Engel Is a Thoughtful Leader Who...