The Village Green May 22, 2020
0 FacebookTwitterPinterestEmail

At its May 11 meeting, the South Orange Board of Trustees adopted financial agreement for the Vose Avenue Apts. project that includes a 25-year tax abatement as well as millions of dollars in contributions from the developer from a land purchase, an affordable housing contribution and a public improvement contribution.

The development is a 5-story, mixed-use redevelopment project, to by undertaken by HUB Realty, that will bring 110 units of housing, a minimum of 12,000 sf of retail and a maximum 10,000n sf of second floor commercial space to the heart of South Orange Village. The developer will provide a minimum of 121 residential parking spaces and construct a garage that provides at least 70 public parking spaces.

Ordinance 2020-11 approved “the application and financial agreement for tax exemption fo Vose Avenue Apts, Urban Renewal, LLC for an urban renewal project” on Block 1006, Lots 1,2,3,9,10, 11, 13 and 14 — an area including most but not all parcels bordered by Vose Avenue, South Orange Avenue, Scotland Road and Taylor Place.

The developer will meet its affordable housing requirement by providing 10% of affordable units onsite and 10% offsite. The 10% offsite payment of $825,000 will be used for the Third Avenue affordable housing project (40 units) that the Village is building in conjunction with partners, according to Village President Sheena Collum. 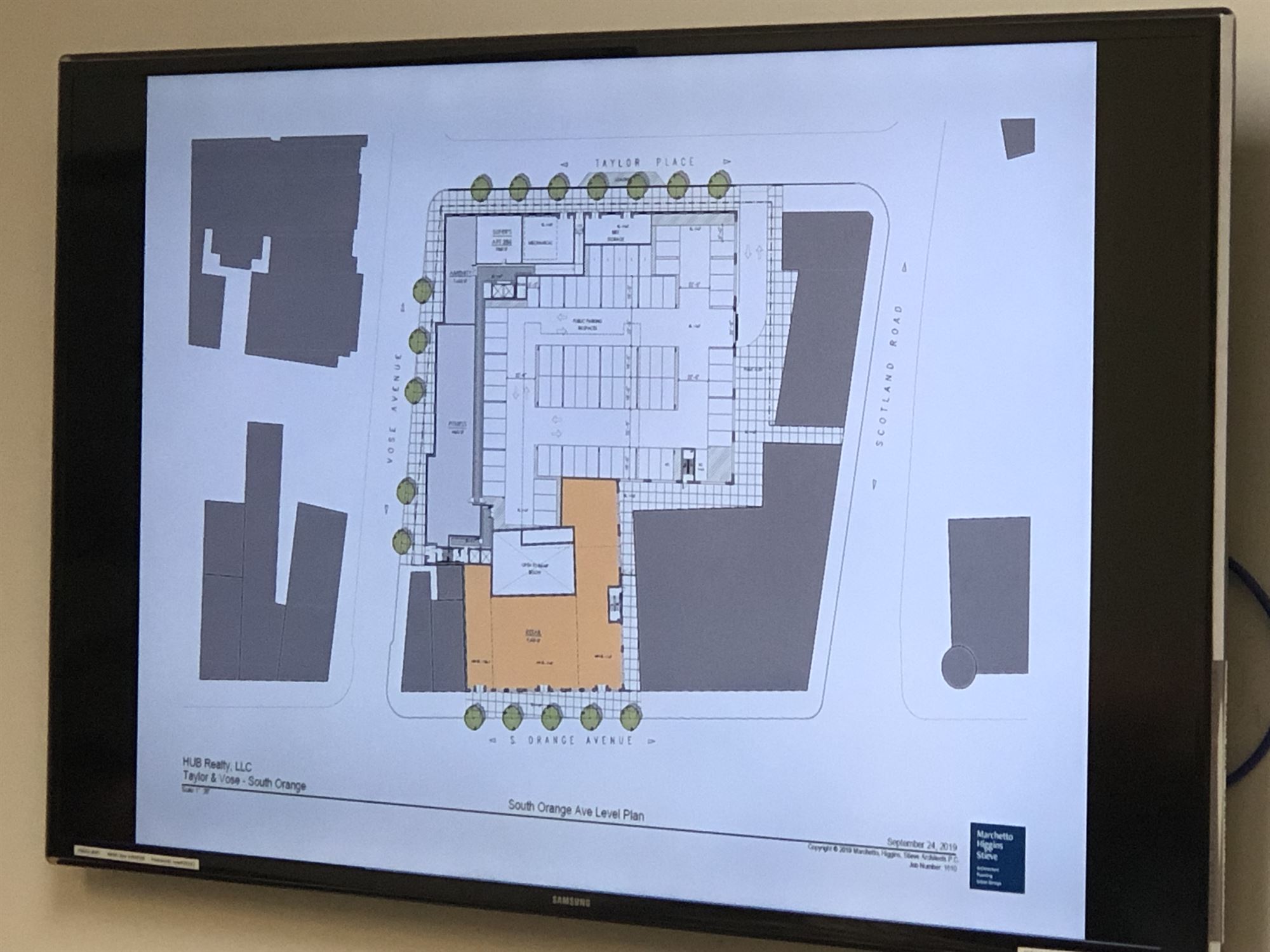 Note: This rendering from the Sept. 25, 2019 Development Committee meeting does not represent a final design.

In addition, the plan includes a $1.3M public land acquisition by HUB Realty, as well as a $700,000 Public Improvement Contribution “for purposes of funding off-site capital improvements and associated costs,” and an agreement for the Township to lease commercial space at a rate of $1.00 per annum for a minimum term of 25 years at the end of which the Village will “have right-of-first-refusal for a 5-year lease at market rate rent with option for one 5-year extension.”

Collum said that the $1.3M land acquisition had helped the Village to “plug its deficit” this year as the township say a loss of $1.8M in revenue due to the COVID-19 pandemic.

“Most importantly these redevelopment projects are going to fund our capital projects” including the Baird Center and the library renovations, while enabling the Village to keep tax increases low.

Trustee Steve Schnall said that the project would inject much needed energy into the Village Center and that people would no longer refer to the area as the “Blockbuster site” — referring to the long-shuttered video store that had occupied one of the South Orange Avenue streetfront locations on the block.

The ordinance adopting the financial agreement notes the economic benefits that the project will provide for the Village including the creation of construction jobs and permanent jobs as well as municipal revenue through fees as well as the parking lot purchase and public improvement contribution. It also notes that “given the uncertainty and instability of current economic and market condition, the investment risk makes the financing of the project infeasible in the absence of a tax exemption provided by the Village.”

Next step for the project is the submission of a site plan to the Planning Board for review and approval, a process that normally takes several months for a project of this size and complexity. “They have not filed yet but we expect proceedings to begin shortly,” said Collum via email.

Following site approval, construction will get underway. During the May 11 meeting, Collum addressed the project schedule, saying it should not be more than 24 months, but in recognition of the pandemic, if certain circumstances arise the schedule could be amended.

The financial agreement begins on p. 48 of the agenda here: